More
Home Media If Western 'liberals' can whitewash 9/11, imagine what they did to our history
Editor's picksFeaturedMediaOpinions
Updated: 12 September, 2019

If Western ‘liberals’ can whitewash 9/11, imagine what they did to our history

How much has 9/11 become a footnote? An elected US Congresswoman by the name of Ilhan Omar referred to it recently as “some people did something.”

This is from the New York freaking Times, the supposed newspaper of record. See? It is now the “airplanes” which took aim and brought down the World Trade Center. The Islamic jihadis who were piloting those planes no longer exist in liberal memory. 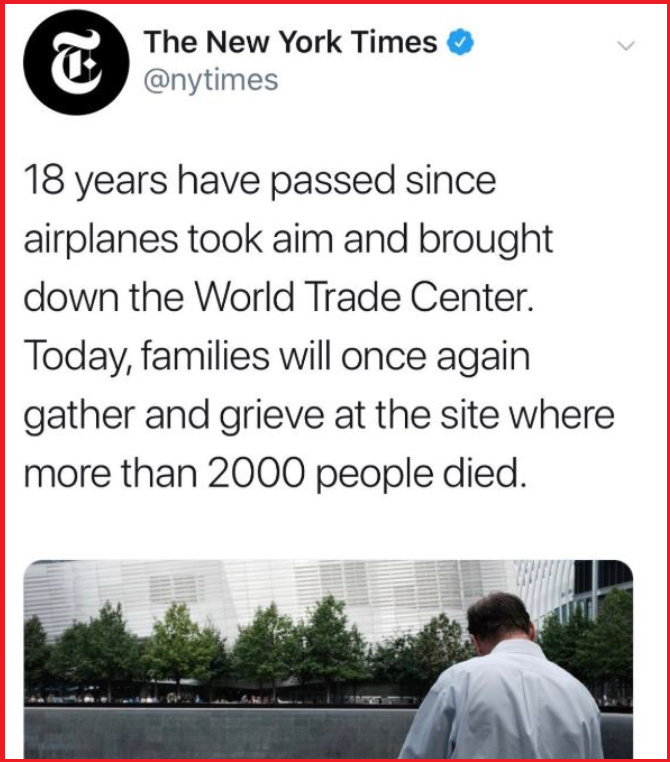 Interestingly, the number of victims of the terrorist attack has also been reduced, from close to 3000 to 2000. That’s a 33 percent reduction, less than twenty years after the attack happened.

After much ridicule, the New York Times deleted the tweet and posted a new one, still failing to mention Islamists anywhere.

3000 people were “lost”? You mean like in the Bermuda Triangle? Thankfully, they got around to using the term “terror attacks” somewhere in the tweet.

One can imagine the New York Times newsroom, the eggheads sitting around, racking their brains, trying to come up with a way to mention 9/11 without any reference to Islamism. Language is a funny thing.

It is a symptom of just how much power Islamism exerts over the free world today. From human rights to feminism, every cause in the free world has been made subservient to the demands of Islamism. In the case of India, the old Western prejudices about Hindus have been reinforced by Islamist hatred for pagans and idolaters.  If you are wondering how a hate filled Hinduphobe could have been embedded as NPR producer in Delhi, there’s your answer.

In just twenty years, the terrorist attacks of 9/11 have been reduced to a footnote in global liberal discourse. The event is mentioned in dodgy language that obscures as much as possible who were the villains behind it.

Instead, “Islamophobia” is all the rage now, even if much of it is imagined.

How much has 9/11 become a footnote? An elected US Congresswoman by the name of Ilhan Omar referred to it recently as “some people did something.” The entire American liberal complex stepped in to defend her words. Incidentally, Ilhan Omar was speaking at an event organized by the Council of American Islamic Relations (CAIR), which was an un-indicted co-conspirator in a case involving terror funding in Palestine.

Yeah, that much of a footnote. You can go ahead and click the Washington Post link about this matter, which makes excuses for CAIR by saying  that the un-indicted co-conspirator thing is “true fact” that “lacks context.” Yeah, “lacks context.” Imagine being on a plane, when the passenger beside you says they were connected to Al Qaeda, but in a way that “lacks context.”

Now think about this : if they can whitewash 9/11, what have these liberals done to the interpretation of our several thousand year old history?

Look no further from what they have done even to our recent history. The Godhra carnage of 2002 has been wiped out of public memory. Even when it is mentioned, it is always presented as a controversy about who actually did it. Despite the fact that the offenders have all been identified and their sentences confirmed by the High Court a very long time ago. The truth has been forgotten, the smears remain.

In fact, the smears and conspiracy theories about Godhra are gradually being turned into the universally accepted version of history.

This is what happens to recorded history from 2002.

For propagandists of this magnitude, how simple is it to distort history from 1000 or more years ago, history that has to be surmised by piecing together scraps of evidence that are hard to come by?

The most infamous of these would of course be the Aryan invasion Theory (AIT). Yes, the liberal historians of today, led by their Emeritus queen, claim they never believed in AIT, but in the migration theory. Technically, they are right. But they had a far more devious strategy on AIT : first, they observe a strategic silence on the issue, allowing the AIT (and the Hinduphobia that comes with it) to circulate freely in the public sphere. The second is even more clever : they use the word “migration” for everything, including the Islamic invasions of India. Thus, the difference between “migration” and “invasion” is rendered meaningless. Yes, it’s devious. We are not dealing with amateurs here, but with established professionals with impressive CVs built in the course of their propaganda careers.

So how do we get back our past?

The old system is now so flawed, so moth eaten and so bigoted that it needs to be discarded in its entirety. The solution is long and painstaking and will likely not yield immediate results. The propaganda edifice of modern liberalism was not built in a day: nor will it go away in a day. We have to start from the ground level, building a whole new group of institutions that will question everything, write thousands of new books and operate with highest standards of academic rigor. You can’t “change” the textbooks because they are beyond redemption. The solution is to write new ones. For this, we will require an entirely new generation of professional historians who start afresh, from the same place where colonial historians began over a hundred and fifty years ago. No easy quick fixes.

Indian history as it is told in the official version, has failed. It’s worthless and a lie. We have to reread and rewrite everything.

The ‘Revolutionary Poet’ and the ‘Great Scholar’: Behind the veils of the Dravidian Delusion

One of the persistent pieces of given wisdom in Indian political discourse is that the Dravidian movement was a progressive one.
Read more
Opinions

On the eve of #NationalHandloomDay on 7th August, founder of Dastkar and textiles Prima Donna Laila Tyabji chose to rant about this govt’s decision of scrapping of the Handloom Board
Read more

Does Rajdeep Sardesai think that untimely death of Sushant Singh Rajput doesn’t deserve attention because he was not a “very big star”? Seems so

Calling the investigation into death of Sushant Singh Rajput a 'circus', Rajdeep Sardesai went on to claim that the issue has now turned out to be another feud between Mumbai Police and Bihar Police.

Amidst the meltdown suffered by Liberals, several Hindus started suggested that they should apply 'Burnol' to their 'burn wounds' that have been caused by the construction of the Ram Mandir

‘He saved our lives’: Survivors of AI plane crash hail Captain Sathe, who served for ‘Golden Arrows’, which has recently been recommissioned with Rafale...

Captain Deepak Sathe was a decorated former India Air Force pilot. He passed out from AFA with the 'Sword of Honour' in 1981.

Muslim Cleric in Sindh province in Pakistan on the run after video of hem raping a child inside a mosque emerges, case registered
Read more
Opinions

Hindus, the last standing major pagan culture in the world: Hagia Sophia, AIMPLB and why secularism is a scam

While Muslim majority Turkey wants to intervene in Kashmir, AIMPLB talks about the Hagia Sophia even as it wags its finger at the Supreme Court
Read more
News Reports

‘Be a good wife’: 14-year-old Christian girl Maria Shahbaz, abducted and converted to Islam, to be returned to her abductor, rules Lahore HC

The Lahore High Court has ruled in favour of a Muslim perpetrator who abducted, forcibly converted and married an underage Christian girl.
Read more

Another incident of Hindu girl abducted by Muslims, forcefully converted to Islam and married by abductor in Pakistan comes to light
Read more
Political History of India

The ‘Revolutionary Poet’ and the ‘Great Scholar’: Behind the veils of the Dravidian Delusion

One of the persistent pieces of given wisdom in Indian political discourse is that the Dravidian movement was a progressive one.
Read more
News Reports

On the eve of #NationalHandloomDay on 7th August, founder of Dastkar and textiles Prima Donna Laila Tyabji chose to rant about this govt’s decision of scrapping of the Handloom Board
Read more
Media

Does Rajdeep Sardesai think that untimely death of Sushant Singh Rajput doesn’t deserve attention because he was not a “very big star”? Seems so

Calling the investigation into death of Sushant Singh Rajput a 'circus', Rajdeep Sardesai went on to claim that the issue has now turned out to be another feud between Mumbai Police and Bihar Police.
Read more
News Reports

‘Previous govts did not pay any attention to Ayodhya, Yogi ji’s complete focus in on developing the birthplace of Ram’: Royal of Ayodhya

Bimlendra Pratap Mishra said that Ayodhya was robbed off its glory due to the absence of a Bhavya Ram Mandir.
Read more
Entertainment

‘Unspoken caste system that shaped America’: Oprah Winfrey sends book, that needlessly drags India into a debate about slavery in USA, to 500 professionals