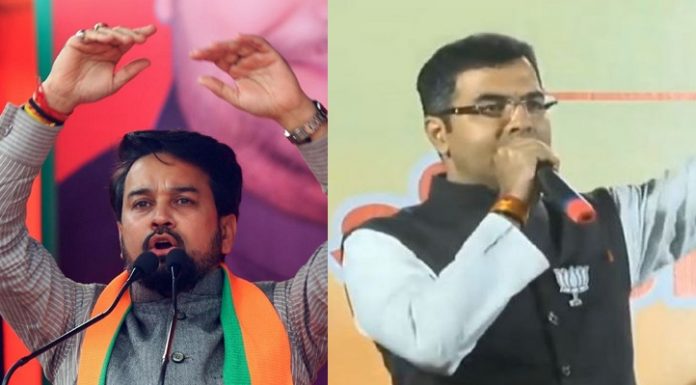 Citing the controversial statements made by Union Minister Anurag Thakur and Delhi BJP MP Pravesh Verma in an election rally, Election Commission on Wednesday ordered BJP to remove both of them from the list of star campaigners for the assembly elections in Delhi.

On January 27, while addressing an election rally in Delhi, Anurag Thakur, who is Union Minister of State for Finance, led his supporters to chant the slogan: “Desh ke gaddaron ko, goli maro sa**lon ko.”

A day later, the Election Commission had issued a notice to Anurag Thakur, asking him to explain his statement.

BJP MP Parvesh Verma, the other BJP leader against whom the Election Commission has acted, in a statement, had vilified the people of Shaheen Bagh and said they will “enter your homes and rape and kill your daughters and sisters and that only Prime Minister Narendra Modi and Home Minister Amit Shah can save the people”. He had also said that if BJP comes to power in Delhi, the Shaheen Bagh protests will be cleared in an hour, and illegal mosques built on govt land in his constituency will be removed.

Meanwhile, Congress leaders Ajay Maken and Subhash Chopra too had approached the Election Commission and registered complaints against Anurag Thakur and Pravesh Verma for making inflammatory and instigating remarks ahead of the Delhi elections.

Harish Khurana, a spokesperson of the BJP’s Delhi unit and son of former chief minister Madan Lal Khurana, defended the union minister, saying that it was the crowd that uttered the inciteful words and not Thakur.

In a statement Khurana said, “If you see the video, Thakur did not even say those words, so he should not be held responsible. The slogan is not invented by him, it is lasted for years”.

Khurana, however, said that the hate exists on both sides. “More than about being right or wrong, one must see who started it. There were slogans of ‘Jinnah-wali azaadi’ at Shaheen Bagh. BJP leaders were told that they need to take permission to enter Shaheen Bagh, not to mention the inconvenience that has been caused to people”.

Days before Kapil Mishra was pulled up by the Election Commission for inciteful comments such as “Delhi mein chhote chhote Pakistan bane”, “Shaheen Bagh mein Pak ki entry”, etc. The election commission gagged him for 48 hours and an FIR was filed against him.