Scriptwriter of Karan Johar’s film Takht deactivates his Twitter account after spewing hatred on Hindus, here are some of his problematic tweets

Hussain Haidry, a rabid Islamist, has also often ranted about 'Brahminism' and 'Brahminical Hegemony', a convenient tirade invented by Hinduphobic bigots to target Hinduism under the cloak of targeting one particular caste.

Hussain Haidry, a poet and writer who is also working with Bollywood Director Karan Johar in his new period drama ‘Takht’ has now deactivated his account after resorting to posting blatant Hinduphobic and hateful tweets.

Haidry, a quintessential Islamist, has been spewing venom against Hindus on Twitter with active backing from the ‘liberal-secular’ media. On Monday, Hussain Haidry took to the micro-blogging site to express his hatred towards Hindus as he called the members of entire indigenous faith of the country as ‘terrorists’. Following the controversy, netizens had slammed the Bollywood writer for his anti-Hindu propaganda and had called for the boycott of Karan Johar’s movie ‘Takht’.

As netizens demanded strict action against the Hinduphobic Islamist Hussain Haidry, he proceeded to deactivate his Twitter account.

Hussain Haidry has been making such problematic tweets ever since the passage of the Citizenship Amendment Act. In the aftermath of the violence at the Jawaharlal Nehru University (JNU) between two groups of students, Haidry had declared it ‘state-sponsored Hindu terrorism’ and ‘Hindu-sponsored state terrorism’.

Hussain Haidry, a rabid Islamist, has also often ranted about ‘Brahminism’ and ‘Brahminical Hegemony’, a convenient tirade invented by Hinduphobic bigots to target Hinduism under the cloak of targeting one particular caste.

Compelled by his hate for Modi, Hussain Haidry just a few days back had taken to social media to incite violence by urging people to ‘show courage’ and ‘beat up’ the ‘upper caste’ Hindus, who according to him, are ruining the country. He had asked his people to go to each and every household in their respective colonies and hit all those voting for the BJP with chappals (slippers). 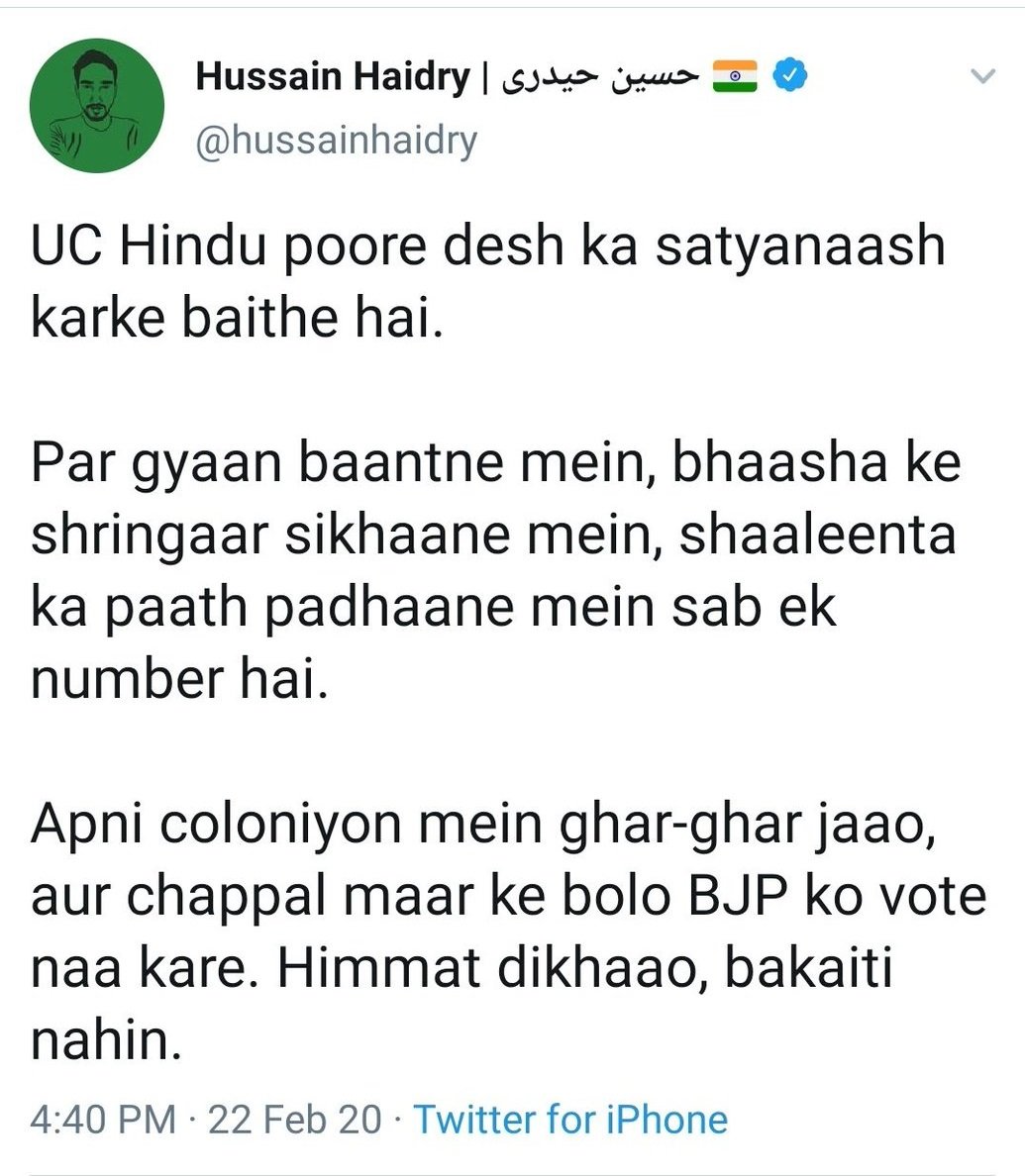 Earlier, netizens had exposed Hussain Haidry on social media for his past ‘Jihadi’ posts where he had fantasized killing people. A series of old tweets of Hussain Haidry has come to haunt him back in which he has openly made his intentions to kill and inflict pain on people.

Hussain Haidry, who the ‘liberal-secular’ ecosystem considers to be an emerging poet, in 2012 took to Twitter to unapologetically express his wish to kill people.

In another tweet, dated October 2012, Haidry had even composed a poem to fantasize about his dreams of cybercrime and hijacking aeroplanes.

Not only that, Haidry, like a true Islamist, had even instigated others to pick a fight with people, burn their house and kill a man if there was a chance.

Hussain Haidry is one of those individuals who appear to have lost their good senses following the consecutive electoral victory of a party that he dislikes. The intense Hinduphobia and anti-Modi hatred by Islamists like Hussain Haidry have now resulted in vitiating the atmosphere in the country which is being manifested with Muslim mobs resorting to large-scale violence against the state, particularly Hindus.