The assembly elections in Gujarat are approaching, and with this ‘Gujarat model of development’ is back in news. While Congress is trying to attack on development or ‘vikas’, BJP is reinforcing its traditional message that the party has taken Gujarat on a path of development during its regimes.

Not only the political parties and the news media, even the social media is abuzz with this debate. At least two video clips released by the BJP underlining its messages around ‘vikas’ have gone viral in recent times.

Now social media users too are jumping in with their perspective and recently a Twitter user named @Gujju_Er came up with a twitter thread, which listed comparative images about how Gujarat’s landmarks look today, as opposed to a few years back:

The above tweets detail how Gujarat’s urban landscape has changed over the years, which includes Sabarmati river which used to run dry, now remaining filled with Narmada’s water, the modernisation of the Vadodara Bus station to name a few.

So first of all is it accurate and how can we create a similar historical rendition of our area?

The software which he uses to list out these pictures is Google Earth:

In google earth there is a feature ‘show historical imagery’

This is a software developed by google which creates a 3D model of earth’s locations based on satellite images of the area. Apart from this, Google Earth also provide a 3D model of the moon, mars and the outer sky. The application ahas Google’s street view program and even a flight simulator game embedded into it.

The main feature which is used in order to see the historical changing of landscape is known as “Historical Imagery”. So after looking at @Gujju_Er’s twitter thread, we decided to check this application out and this is how you also can use it: 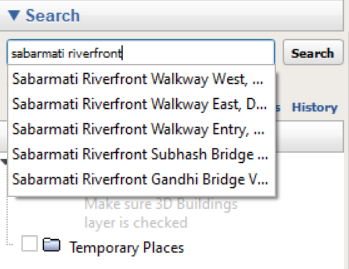 Now coming to the technical side of things, how does Historical imagery work?

The images on google earth are derived via programs like Landsat, a USGS (United States Geological Survey) and NASA program which has been observing the earth surface since 1972 and other programs like Sentinel and MODIS.

Also it is evident from another similar program designed by Google named Timelapse (which lets you see how the earth has changed over a period of 32 years) that Google sources images from satellite data already gathered by space agencies from as early as 1972.

Taking a wild guess, storing the images of the region over the years and then using them as an input seem to be how this feature works.

Also one of the questions which struck us was that whether the changes were being recorded simply because Google’s mapping procedure has become more detailed?

Firstly, Google won’t be creating and most importantly continuing any feature, if it had such a overtly noticeable flaw.

Plus even though the quality of images used in Google has certainly improved, even a low quality image captured by a satellite would allow us to make out glaring differences, like the construction of a new bridge near the Sabarmati walkway. Also since many of these pics are from high altitude, the contrast captured is not primarily due to better tech, but due to actual changes on ground.

Having said that, this feature of Google Earth may not always work as development of this domain has been slow in India, with people even demanding in the past that the project be banned for security reasons. The same security concerns have also meant that Google has been unable to launch is very popular “Street view” feature in this country.

Whatever the case may be, citizens can certainly use such a feature to track the changing landscape of the country and ascertain whether we are indeed moving forward on a path of development.

With inputs from Nirwa Metha