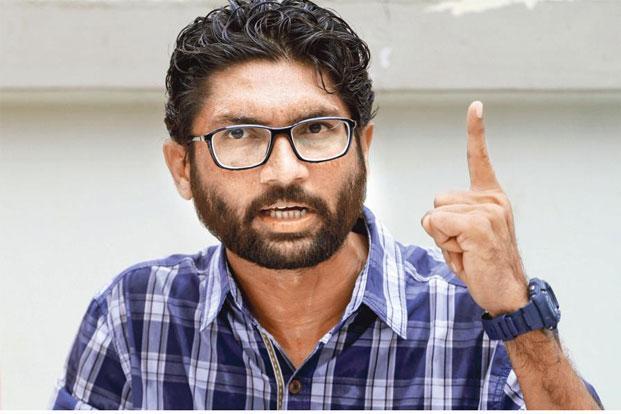 In what can be seen as hitting a new low for Jignesh Mevani, who was earlier caught spreading misinformation about the death of a labourer, shared a photoshopped image of a popular speaker and columnist Shefali Vaidya, who has often exposed left-wing and ‘liberal’ hypocrisy and on several occasions bullied and threatened.

Mevani shared an image where Vaidya was Photoshopped next to an image of Uttar Pradesh Chief Minister Yogi Adityanath and Art of Living’s Sri Sri Ravi Shankar and the image was juxtaposed next to an image from the film ‘Oh My God’ which takes on superstitions and fake self-styled godmen.

Acting like a lowly troll, Vadgam MLA Jignesh Mevani, who was associated with Aam Aadmi Party before breaking away and fighting elections last year, targeted a private citizen, Shefali Vaidya, just because their ideologies don’t match. Mevani got called out for his troll-like behaviour which bordered on target-bullying an individual.

An illustration of surging, seething, bunch of politicians who daily abuse women just because they favour BJP, no?

Photoshopping images gives away their vile passions and a lust of vengeance and hate, no?

This guy is an elected leader.
The lady is a private citizen.
The image is obviously photoshopped!
But this will still not count as harrassment!!! https://t.co/tEoplMkQSi

Some even asked Twitter to act as swiftly against harassment of right-wing women as it does for people with different political ideology.

This guy is an elected leader.
The lady is a private citizen.
The image is obviously photoshopped!
But this will still not count as harrassment!!! https://t.co/tEoplMkQSi

Eventually, Jignesh deleted the tweet, but he did not apologise to either of the people involved in the Photoshopped image for the harassment.

I am told that this is a photoshoped image. Apologies for posting it without verification. Deleting my previous tweet now and will be careful in future.We all should be careful abt this and whenever we get to know that it's fabricated we should delete ithttps://t.co/Iw5FnxINe5

This is not the first time an elected representative has bullied a private individual. Earlier, Trinamool Congress MP Derek O’Brien had lowered the dignity of the house and defamed Twitter users by reading out propaganda material written by abusive troll masquerading as a journalist, Swati Chaturvedi, accusing them of giving criminal threats to other people while being followed by Prime Minister Modi.

While most of those who cry ‘harassment’ from ‘paid trolls’ on Twitter remained silent, some even encouraged Mevani since it has since received over 600 retweets and 2,200 likes. Mevani had contested as an independent candidate with the support of Congress in Gujarat elections held in December last year.