More
Home Opinions Pakistani pop singer wanted a Dutch MP killed for blasphemy, this is where she...
Opinions
Updated: 2 September, 2018

Pakistani pop singer wanted a Dutch MP killed for blasphemy, this is where she learnt bigotry from 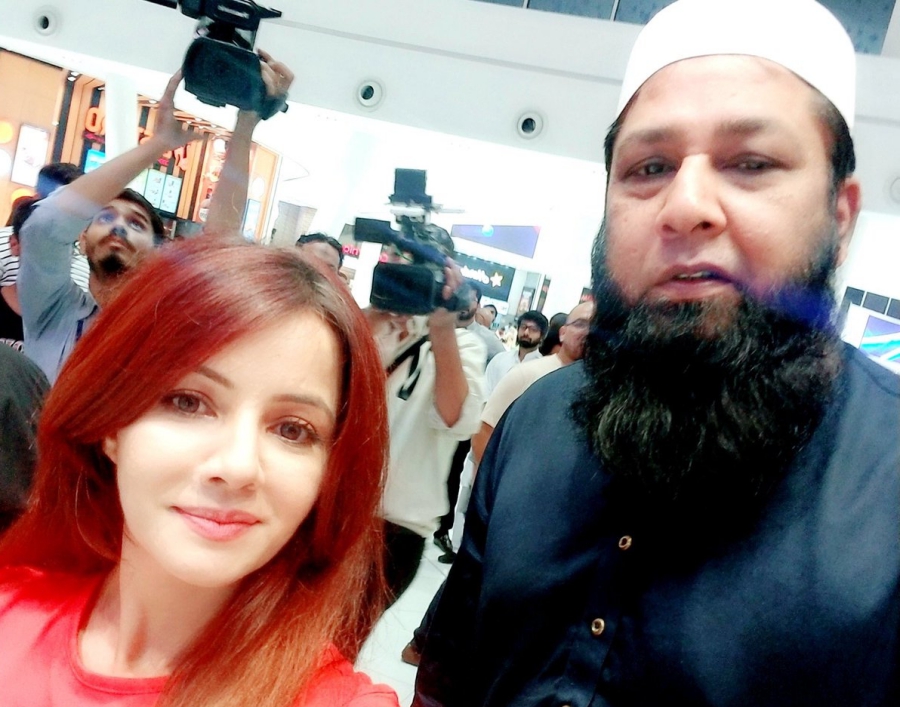 Last Friday, Dutch MP Geert Wilders cancelled his ‘Draw the Prophet Mohammad’ cartoon contest after over 10,000 supporters of the Tehreek-i-Labaik Pakistan party demanded the Pakistani government expel the Dutch Ambassador, and to end all diplomatic ties with the Netherlands.

The contest was due to be held in November, however, Mr Wilders made a statement, saying “To avoid the risk of victims of Islamic violence, I have decided to not let the cartoon contest go ahead.” A 26-year-old Pakistani Islamic Extremist was also arrested last week in The Hague after releasing a video calling for the murder of Mr Wilders.

According to the majority of Islamic Schools of Thought, drawing the Prophet Mohammad is a blasphemous act, and carries a heavy penalty due to its offensiveness. Thousands of death threats flooded Geert Wilder’s social media pages in the last three days alone, mostly coming from Pakistan, and all calling for his murder and assassination.

Among these ferocious chants of death were the violent remarks made by another 26-year-old Pakistani, this time it was Rabi Pirzada, a fledgeling Pakistani pop singer. Joining the wave of death chants, she tweeted “Making cartoon of the Prophet (Mohammad) is the worst act of terrorism. The sketch makers must be hanged immediately”, publicly displaying her extremist views and opinions. 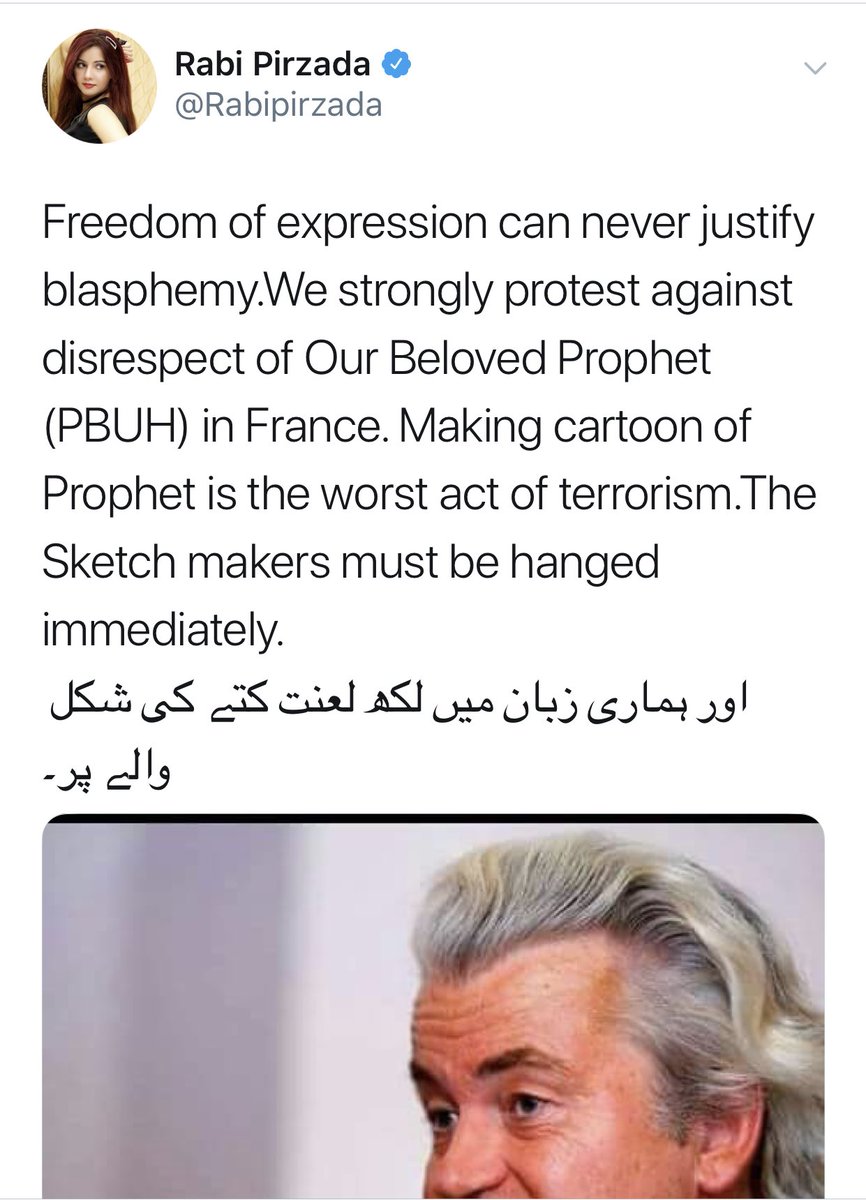 Her extremist views were later called out by me.

Pakistani pop singer @Rabipirzada has called for the immediate hanging of @geertwilderspvv. More proof that nothing in Pakistan doesn’t revolve around terrorism and violence, even entertainment. It’s all about destruction. pic.twitter.com/zzaqS8ZUIA

After I had confronted her, she raced to delete the above tweet (once available here) as it revealed her level of understanding regarding terrorism. She then hurried to play the victim card and claim that she was, in fact, a peaceful person who is proud of her freedom of speech, saying “Pakistan is a country of peace, love and freedom of speech… don’t manipulate my words”.

Drawing cartoons may very well be offensive, but it certainly isn’t terrorism, and calling for the ‘immediate hanging’ of all cartoonists without trial is in fact promotion of domestic terror.

I wanted to understand why a 26-year-old Muslim pop singer would speak and act like a militant Islamist, and the findings were nothing short of appalling.

Pirzada took to Twitter once again today to share a selfie picture she took with Inzimam-ul-Haq. Inzamam is a former Pakistani cricketer and a current member of Tablighi Jamaat, a militant Islamist organisation with direct links to Islamic terrorism and global Jihad. To this day, Inzimam has not disassociated himself from the extremist organisation. 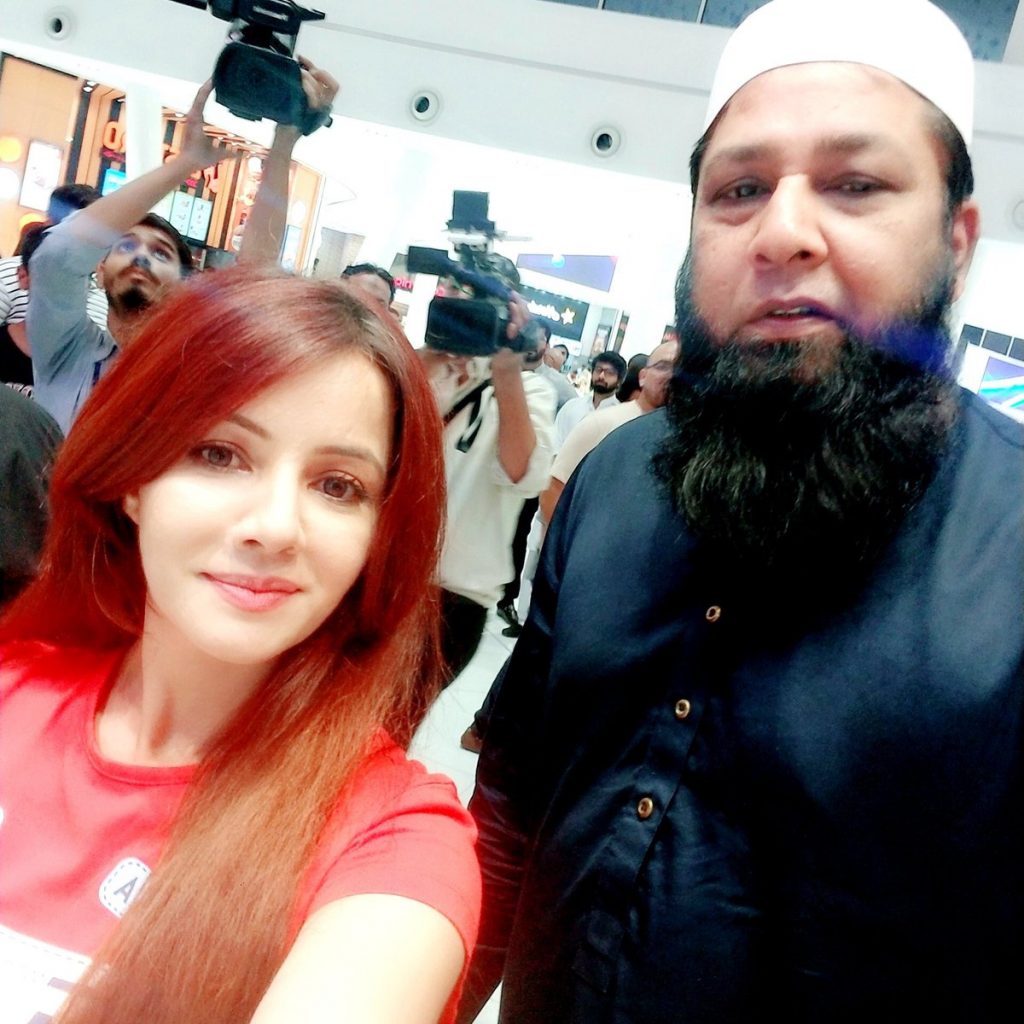 French government statistics show that 80% of Islamist Extremists in Frace alone have come from Tablighi Jamaat, with French intelligence officers describing the group as the “Antechamber of Fundamentalism”.

The only person charged in the 9/11 bombings, Zacarias Moussaoui, as well as Djamel Beghal who plotted to blow up the U.S Embassy in Paris were both members of Tablighi Jamaat. The organisation has been connected to tens of terrorist plots and actual attacks, including the 7/7 London Bombings and the 2007 Glasgow International Airport Attack.

These had prompted Philip Haney from the U.S Department of Homeland Security to describe Tablighi Jamaat as part of a “trans-national Islamist network”. Michael Heimbach, the Assistant FBI director said that Tablighi Jamaat was used by Al Qaeda for recruiting purposes. This was exactly the case with Inzimam, who was indicted for using his position as a prominent cricketer to promote a fundamentalist brand of Islam.

Yet here is Rabi Pirzada, affiliating herself with Inzimam-ul-Haq, not once, but twice. So, if you were wondering how a young pop singer could possess such extremist views, you only need to look at her social circle, and who she proudly associates herself with.

Yesterday she wished death upon a Dutch MP, and today she’s proudly standing beside a member of a terror-affiliated organisation. The irony of all this is that Tablighi Jamaat promotes segregation and believes that women should stay at home.

(Imam Tawhidi is an Australian Muslim Scholar, Thinker, and one of the main leading voices of Islamic reform who has dedicated his life to ideologically tackling the spread of Islamic Extremism. He is the President of the Islamic Association of South Australia and is greatly involved in interfaith diplomacy. Imam Tawhidi is available on Twitter and Facebook)