The arguments in the case concluded on October 16th and the verdict in the Ram Janmabhoomi case is expected anytime between 14th and 16th November 2019.

On October 16th 2019, a report was leaked to the media that contained some of the details of the mediation panel report that was submitted to the Supreme Court in a sealed cover. It was reported that the Sunni Waqf Board was willing to give up its claim on the Ram Janmabhoomi land under three conditions. Now, Ejaz Maqbool, the lawyer of the Muslim parties has filed a plea in the Supreme Court categorically rejecting the reported recommendations made by the mediation panel in the Ayodhya case. 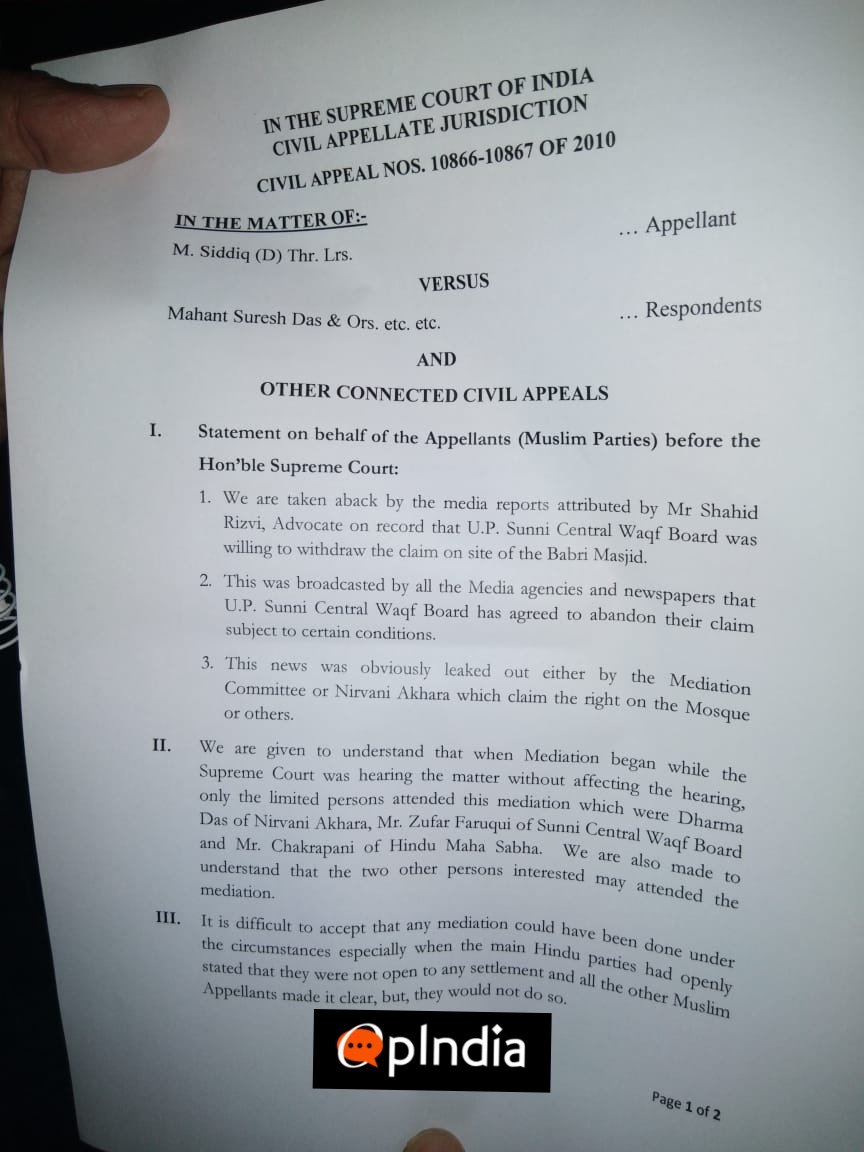 The petition says that the Muslim parties were taken aback by the statements of the representative of UP Sunni Waqf Board saying that the Board is willing to withdraw its claim on the Ayodhya site and say that this information was obviously ‘leaked to the media’ by either the Mediation Committee or the Nirvani Akhara.

Read: Ayodhya Dispute: Muslim parties seem to have given up hope for a favourable verdict and are afraid of the floodgates opening

The petition states that it is ‘difficult to accept’ that any mediation could have been done under the circumstances especially when the main Hindu parties haad openly stated that they were not open to any settlement and all the other Muslim appelants made it clear that they too were not in favour of any settlement. Almost implying far more than needed, the petition that that Senior Advocate Sriram Panchu had sent a communication to the Chief Justice of India that protection be granted to Zafar Faruqui and the Uttar Pradesh State Government was asked to do so promtly. It then says that there was a second communication to the CJI which was not disclosed.

Further, the petition says that the mediation committee itself was not representative and that the alleged ‘leak’ to the media was in violation of the Supreme Court orders. The petition also raises doubts on the timing of the said ‘leak’.

It then says that the Muslim parties do not accept the proposal made which have been leked to the media nor the procedure by which the mediation has taken place. They also said that they reject the manner in which a withdrawal of the claim was suggested as a compromise.

Reportedly, The Sunni Waqf Board had said that it will give up the claim and asked to make Place of Religious Worship Act 1991 watertight, government should take over maintenance of around 22 mosques in Ayodhya and Supreme Court should form a committee to check into status of other religious places under ASI’s control.

Read: Islam is much more than Quran: Rajeev Dhawan representing Muslim side in Ram Janmabhoomi case says in Supreme Court

The arguments in the case concluded on October 16th and the verdict in the Ram Janmabhoomi case is expected anytime between 14th and 16th November 2019.