OpIndia
Home News Reports 'Despite being in power for two-third of the last 48 years, Congress has left behind a legacy of poverty': Arun Jaitley
News ReportsPolitics

‘Despite being in power for two-third of the last 48 years, Congress has left behind a legacy of poverty’: Arun Jaitley 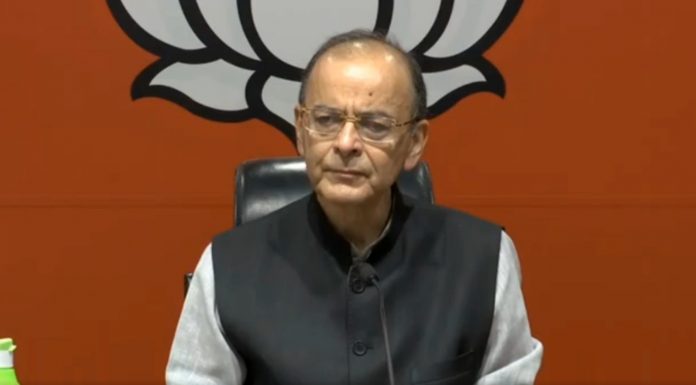 Today Congress president Rahul Gandhi announced the Minimum Income Guarantee Scheme as a poll promise for the Lok Sabha elections. The party is promising Rs 72000 per year to 20% population of the country. Reacting to this announcement, union minister Arun Jaitley has written a blog on his Facebook page describing how Congress has been ineffectual in eliminating poverty notwithstanding the considerable number of years of being in power and how Modi government has been able to offer much more to the poor than empty promises made by Congress. Below is the reproduction of his blog:-

No political party has betrayed India for more than seven decades other than the Congress Party. It gave to the people of India many slogans and very little resources to implement them.
The Nehruvian era pushed India to the 3.5% rate of growth. When the world was moving fast and opening up, we decided to regulate our economy. Indiraji understood slogans better than economics. Inflation, unemployment, corruption and erroneous policies hindered India. A large part of economic reforms unleashed in 1991, was to undo what she did. In 1971, she gave her legendary slogan ‘Garibi Hatao’. Her economics was not about increasing production and generating wealth but only about redistribution of poverty. She supplemented her 1971 slogan while promising in election after election, the welfare of the largest number. Shri Rajiv Gandhi had a historic opportunity to remove poverty. Initially, he showed a desire to do so. But his Government got caught in unsavoury controversies preventing any significant and major changes.
In 1971, ‘Garibi Hatao’ slogan was given by Indiraji. For two-thirds of the last 48 years, her party has been in power. Yet, they left behind a legacy of poverty.
The UPA Government, between 2004-2014, conferred a large number of ‘rights’ without resources to implement them. The legendary bank loan waiver was announced at Rs.70,000 crore – a one time measure. Of this only Rs.52,000 crore was actually allocated, a significant part of which went to the businessmen of New Delhi (Ref. CAG Report). The MNREGA was a rural scheme where Rs.40,000 crore used to be promised every year and the actual spent was in the nature of Rs.28,000 to Rs.30,000 crore.
Today, the Congress President has announced that those whose income is below Rs.12,000/- per month, would be given a subsidy to ‘attain’ that income subject to Rs.6,000/- per month. This announcement is an admission of the fact that neither Indiraji nor her son and certainly not the UPA Government controlled by her descendants, was able to remove poverty. The Congress in general and the Gandhi family in particular, since ‘Garibi Hatao’ slogan was given, has ruled India for more than two-thirds of that period. If it has failed to even address poverty during this period, why should India believe it? Even though the details of the scheme are now known, it was said that the payment will be by DBT. The Congress Party’s internal economist has said that there will be no additional burden on the fiscal deficit.
The loan waiver bluff
The Congress Party in Punjab, Madhya Pradesh, Chhattisgarh, Rajasthan and Karnataka promised a loan waiver. In most places, the promise remains unfulfilled. The party, thus, has a long legacy of slogans with no resources. It has a history of bluff announcements. Karnataka so far has spent only Rs.2600 crore, Madhya Pradesh Rs.3000 crore and Punjab Rs.5500 crore. The farmers are still waiting.
The income support
The landless and poor, amongst the villagers, get an MNREGA payment. Minimum wages for labour have been raised by 42%. Today even most industrial workers get more than Rs.12,000/- a month. The minimum starting salary in Government after the Seventh Pay Commission is Rs.18,000 a month. A small and marginal farmer, besides home, road, toilet, electricity, cooking gas subsidies, crop insurance, MSP payment, will also get income support.
The Opposition’s sabotage of the pro-poor initiatives
If the Congress Party and its friends have so much concern for the poor in India, why is it that its States are going slow in certifying the list of small and marginal farmers who are entitled to receiving the instalment of PM KISAN? Why are some of the States such as West Bengal, Odisha and Delhi, amongst others, not implementing the Ayushman Bharat? What is the fault of their poor farmers that they want to make them pay?
How the Narendra Modi Government supports the poor?
In the last five years, the Government headed by Prime Minister Shri Narendra Modi introduced the Direct Benefit Transfer (DBT) through the banking system. Besides subsidies for food, fertilizer, kerosene, 55 Ministries handed over subsidies to the poor through the DBT which was enabled by AADHAAR. Congress opposed AADHAAR in Parliament and challenged it before the Supreme Court. Ironically, they now want to use the same mechanism. How much is today being given to the poor through AADHAAR, DBT or otherwise? If all other payments are also made through DBT, what will the total amount to?
The simple arithmetic is if multiple bank transfers to the five crore poor families, the existing payment to which is mostly being done. The above averages Rs.1,06,800 annually as against Rs.72,000 which is the Congress now seeks to promise through the DBT mechanism.
Note: In addition to the above, Rs.5.34 lakh crore, there are several other schemes which provide several thousands of crores more to the poor. What is given towards Awas, cooking gas, electricity, sanitation and many other Government’s social schemes is additional. If the Congress Party’s announcement is tested on simple arithmetic, Rs.72,000 for five crore families works out to be Rs.3.6 lakh crore, which is less than 2/3rd of what is being given – A bluff announcement.
Help Opindia Reach Every Indian. Share This Post