OpIndia
Home Fact-Check 'Modi is killing youths of North-East', and other lies of Rahul Gandhi during his NE tour
Fact-CheckNews ReportsPolitical Fact-CheckPolitics

‘Modi is killing youths of North-East’, and other lies of Rahul Gandhi during his NE tour 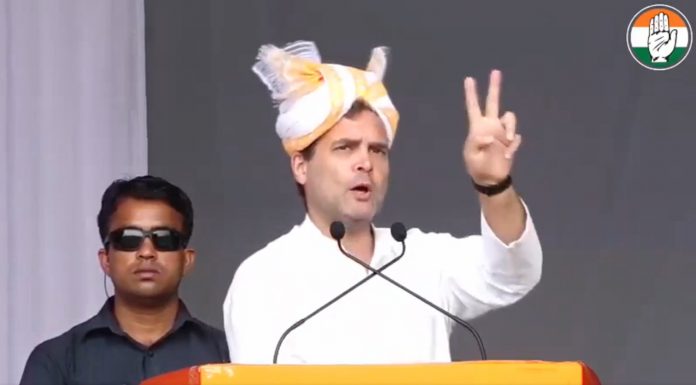 As part of the campaigning for the Lok Sabha elections, Rahul Gandhi is on a tour of north-eastern states. Yesterday he addressed a rally in Arunachal Pradesh, and today Rahul Gandhi addressed programs in Meghalaya and Manipur. And as the Congress president has decided that he is going to defeat Narendra Modi in the Lok Sabha elections based on lies and more lies, his speeches in the northeast were also not different.

In his speech in Itanagar in Arunachal, Rahul Gandhi said that infrastructure in Arunachal and the northeast needs to be improved. The state needs more roads, airports, helipads legislative assembly building etc. He said that the Modi government has not done anything on this regard. Rahul Gandhi must be applauded for accepting that despite the long rule of the Congress party at the centre and in the north-eastern states, the infrastructure needs huge improvements.

To compare the work infrastructure in NE done by Modi government compared to previous governments, let us take the example of bridges on the Brahmaputra. Before NDA-II government came to power in 2014, there were a grand total of three bridges over the Brahmaputra river. And today, there are six bridges, which means the number of bridges built in 5 years is equal to numbers of bridges built in 65 years, most of which was ruled by Congress. One bridge is under construction, and both central and Assam governments have already approved at least seven more bridges over the river. India’s longest bridge, India’s second longest bridge, and India’s longest rail-road bridges were opened in the northeast during Modi’s tenure. Of course, works most of these bridges were started before Modi government, but the fact is that those projects were running at very slow pace, and it is Modi government which expedited works on them and completed the projects.

As Rahul Gandhi was talking about Arunachal, it is important to mention that apart from the second bridge at Guwahati, all other new bridges specifically benefits Arunachal, even if some of them are located in Assam. 6.2 km long bridge over Dibang river which is second longest in India, and 3 km long Alubari bridge are located in Arunachal, while Bogibeel rail-road bridge and India’s longest Dhola-Sadia bridges are located in Assam, and all of them provide crucial connectivity to Arunachal.

Before Modi government, Arunachal had air connectivity only through helicopter. The current government has upgraded and Tezu airport and commercial flights have started from there, while work on another airport near Itanagar has already started. Arunachal was also added to railway map during Modi government, and works on highways and railways n the entire region have been going on in the region at a never before pace.

LIVE: CP @RahulGandhi engages in an open dialogue with students from across Manipur. #RahulDemocracyDialogue https://t.co/jur1JAV9XR

In all the speeches, Rahul Gandhi promised that his government will bring back the special category status for north-eastern states, saying that Modi government has done a great injustice to this region. This is nothing but an attempt to mislead people by Rahul Gandhi, as no state has actually suffered due to withdrawal of the status. Special category is a legacy of planning commission era which has outlived its purpose. The Modi government has scrapped plan and non-plan expenditure, while the share of states in tax revenue was increased from 32% to 42%. The implementation of GST also has resulted in more tax revenue going to north-eastern states, as these states are mainly consumer states.

In Manipur, Rahul Gandhi said that his government will make Manipur the bridge between South‑East Asia and India, and mocked Modi for upgrading the look-east policy to act-east policy. Again the fact is, what Congress governments were planning for decades, the Modi government has already done. Last year, the Indo-Myanmar land route was officially opened at Moreh in Manipur with the inauguration Integrated Check Point along with a passenger terminal in the town.

The work on Kaladan multi-modal transit project is going on at rapid speed, which will connect Mizoram with Bay of Bengal through a land and water route through Sittwe port in Myanmar. A river route between northeast and rest of India is also being established through Bangladesh, which are few examples of implementation of the Act East policy.

Congress President Rahul Gandhi also levelled a very serious charge against Narendra Modi, when he said that Modi is killing youths in the northeast. There can’t be a bigger lie than this. The region has become almost terror free under the current government, and only separatist terrorists are getting neutralised in encounters with security forces. During previous Congress regimes, the general public had to face severe harassment in operations conducted by security forces, which has become a thing of past now.

How can one forget that in 1966, prime minister Indira Gandhi had used the Indian Air Force to combat terrorists inside India, when IAF planes had bombed Aizawl in Mizoram. Large number of innocents had died in indiscriminate bombing and firing by IAF planes. Other than few factions, NDA government is engaged with most extremist groups in the region and as a result, the region has remained mostly violence-free.

No Rahul Gandhi speech is complete without a Rafale lie, so he didn’t forget to include one in his speeches. Rahul Gandhi said that HAL was going to make the Rafale jet at the cheapest rate by Modi came and cancelled the deal. While the reality is, the original Rafale deal was cancelled because HAL was demanding more money than the price charged by Dassault. Even the CAG report on the Rafale has mentioned that HAL was demanding 2.7 times more manhour for making the jet, which would have increased the price so much that Rafale would not remain the lowest bidder.

Rahul Gandhi will address a rally in Agartala later today, and we can expect more lies from him.