More
Home Opinions In science, the best is always yet to come for India, even as small,...
Editor's picksOpinions
Updated: 7 September, 2019

In science, the best is always yet to come for India, even as small, petty minds whine

This has the potential to be a wonderful teachable moment for the general public. In science, there is only hard reality. Only evidence. It’s what makes science so successful.

Abhishek Banerjeehttps://dynastycrooks.wordpress.com/
Abhishek Banerjee is a math lover who may or not be an Assistant Professor at IISc Bangalore. He is the author of Operation Johar - A Love Story, a novel on the pain of left wing terror in Jharkhand, available on Amazon here.
Facebook
Twitter
Telegram
Email
WhatsApp
948

Think about what happened yesterday. An entire nation stayed awake late into the night. Not for the usual Friday night of drunken amusement. But waiting and hoping, eagerly and anxiously for India to land a rover 4 lakh kilometres away, on the south pole of the moon.

How cool is that? A whole generation of young people waiting with bated breath to witness a majestic scientific achievement.

And then they got to see the coolest thing of all: FAILURE.

Yes, failure. Failure reminds us of the supremacy of the scientific method. When you meet with failure, there’s no hiding the reality, no whitewashing, no excuses. You have to face reality, pick up the pieces and try again.

And again and again, until you succeed. That’s science. Once upon a time, people would die of infection from a simple scratch. Thousands of years later, we discovered antibiotics. We discovered the double helix structure of DNA.  We realized that time is relative and that gravitation can bend light.

Thousands of years ago, everyone needed to farm and make food so that we could eat. Today, we have fertilizers and specially bred crops that make it possible for a handful of people to make food for everyone. We have sanitation. We can soar 30,000 feet above the earth in a metal tube with wings. Tomorrow, we may be able to edit genes and cure diseases that people are born with.

What made all this possible? Failures and more failures.

We never give up. Because in science, the best is always yet to come. We know ISRO will get to the moon. Many of the scientists who worked on the Chandrayaan mission today might be retired when it finally happens. But there are hundreds of thousands of kids waiting to take their places at Mission Control. Their imaginations have been fired with the challenges and frustrations that science brings. And that’s always where the real success is.

This has the potential to be a wonderful teachable moment for the general public. In science, there is only hard reality. Only evidence. It’s what makes science so successful.

Why not search for and demand such clarity in everything else?

Now let us look around ourselves: do we see people who never “fail”? Witch doctors with miracle cure on television, perhaps? Have you seen them ever fail?  How about politicians? Ever seen them admit failure? How about intellectuals? Have they ever failed? How about economists? Even Newton got his most basic assumptions about time and velocity wrong. Can you give me an example of a great economist ever failing at anything? Starting from sexiness, they succeed at everything. Amazing, no?

If you are immune to failure, then you are just making stuff up and fooling people. Let us apply this principle to everyone and everything.

One thing that has made everyone on social media angry today is the pettiness and nastiness of the reactions coming in from Lutyens types. It started with NDTV’s Pallav Bagla yelling at an ISRO scientist.

And then there were “experts” who thought it was a great thing that Bagla was asking questions to those who are in “power.”

Ha! A scientist is never in “power.” There is the only reality. A scientist tries their best to figure it out. And more often than not actually, there is a failure. It is journalism that thrives on power cosiness.

But these are people with small minds. 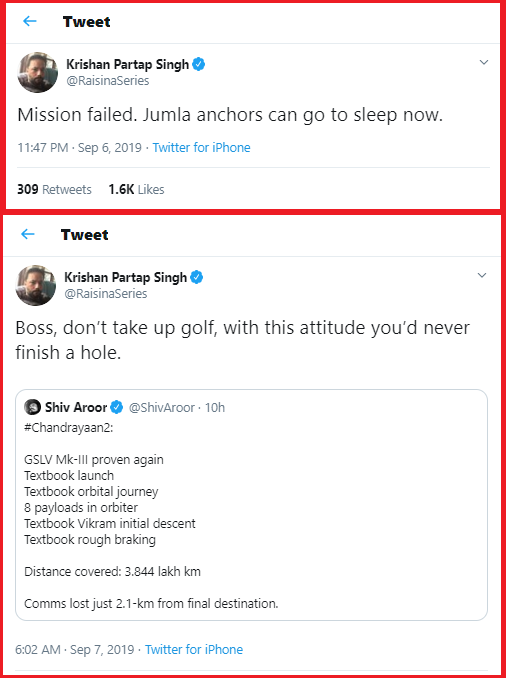 People with small minds whose lives will amount to nothing. Their imagination is limited by things like golf, racecourses or India International Center. Can’t think beyond that. By the way, if you want to “take up golf,” try thinking about the physics of a golf ball, the aerodynamic of its surface, the friction, the trajectory, everything. Try asking what would happen if somebody tried to hit a golf ball on the surface of the moon. In what ways is launching a satellite like hitting a golf ball? Think outside the box. Ask questions. I promise you it will be amazing. As Richard Feynman said, everything is interesting if you get it into it deeply enough.

But that’s not what small minds do, which is why all they can do is mock the failures of bigger minds. Like the Pakistani trolls out there. And incidentally, the government of Pakistan.

The failure today also throws into sharp relief the enormity of the American achievement 50 years ago: they landed a man on the moon back in 1969! We couldn’t land a rover. No use sugarcoating it. We accept the failure and move on. We work even harder to close the gap and actually get ahead. No other way.

On a side note, I think some of the bitterness that you see among liberals comes from their compulsive irritation with the expression “moon landing.” Yeah, America did rub Communist noses into the ground in 1969. Our intellectuals, who are brought up on pro-Communist leanings, have never recovered from the humiliation.

But the future always shines bright, full of possibilities. Let me leave you with this image of PM Modi consoling ISRO chief Dr K Sivan.

And with a message from Swargiya Atal ji, who is still inspiring us from somewhere far far away.

AMU girl complains about being threatened and hounded since CAA was passed, told she will be made to wear “brass hijab”

Calling her a "Sanghi", the fellow AMU students had attacked her for calling out sexualisation of women in the varsity
Read more
News Reports

Secret meetings, plan of action and riots: How Safoora Zargar and others are intertwined in the murder of Ratan Lal during Delhi riots

Google head Sundar Pichai, who studied at IIT Kharagpur, is all set to bring a digital revolution worth Rs 75,000 crore in India: Read...

Google, headed by Sundar Pichai, pitches in to help bring about a digital revolution in India

A tribute to Tapan Ghosh: The firebrand leader who helped Muslim women marry their Hindu lovers and secure a happy ending to their love...

Hindutva Icon of West Bengal, Tapan Ghosh, passed away on Sunday, days after he was diagnosed with the Wuhan Coronavirus.

Choosing loyalists over popularity and calibre has cost Congress dearly. Losing key regional leaders has decimated the party to ruins in many states.

Pakistanis are shocked that Turkish actress does not cover herself head-to-toe in real life like her role in TV show Ertugrul, slams for wearing...

The 'Woke' secular-liberal camp of current times is defined by its elitist arrogance and crass snobbery. 'Human rights activist' Aakar Patel is one such specimen.
Read more

Here are the six significant statements by the court today while denying bail to Tahir Hussain, accused in the Delhi anti-Hindu riots

AMU girl complains about being threatened and hounded since CAA was passed, told she will be made to wear “brass hijab”

Calling her a "Sanghi", the fellow AMU students had attacked her for calling out sexualisation of women in the varsity
Read more
Opinions

A bevy of perverse liberals took to Twitter to denounce Amitabh Bachchan after he got Coronavirus, claiming it to be a "privilege of rich" and accusing him of needlessly occupying a hospital bed
Read more
News Reports

Reports claimed that 107 MLAs, including some independents, were present at the CM's residence. Congress has moved its MLAs to a resort in Jaipur.
Read more
Crime

In touch with ISIS recruiters since 2015: NIA arrests 2 Islamic State terrorists in Pune planning to carry out terror attacks in India