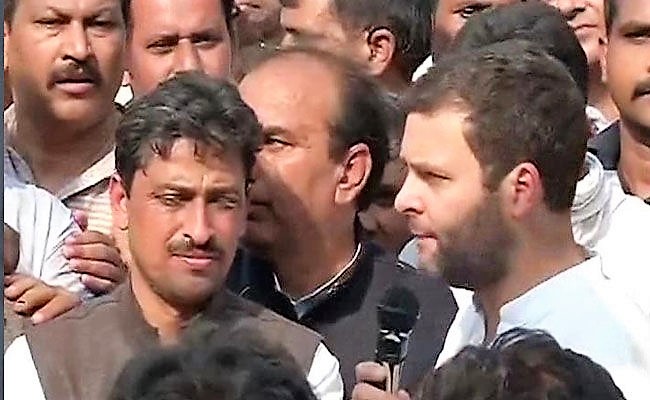 Imran Masood, the Congress leader from Western Uttar Pradesh, who had threatened to chop off Narendra Modi into pieces, has now threatened of forceful agitations by Dalits and Muslims against Yogi Adityanath government.

Masood issued this warning while reacting to the arrest of Chandrashekhar, chief of the militant outfit Bhim Army, which was one of the parties to the recent caste clashes between Thakurs and Dalits in Saharanpur, which left a Thakur dead and houses of dozens of Dalits burnt.

Sniffing an opportunity to widen the caste conflict and exploit the social fault-lines – which incidentally is the declared official policy of Pakistan with respect to its internecine war against India – Masood announced support for Bhim Army. It should be noted that Mayawati’s BSP, which openly indulges in Dalit politics, had distanced itself from Bhim Army after Saharanpur violence.

But it looks like Congress has now decided to align itself with the outfit, with Masood warning the local administration and Yogi government of ‘dire consequences’ if Chandrashekhar was ‘denied justice’. Masood openly communalised the issue and declared that the issue was now about Muslims being with the Dalits.

Masood is reported to have warned that if Chandrasekhar was ‘mistreated’ by police, there would be serious and unpleasant consequences. It should be noted that Masood has been booked for rioting and attempts to murder in various cases earlier.

Congress too has supported Masood’s stand on the issue. “Imran is our leader and we support the stand that he has taken locally,” Uttar Pradesh Congress President Raj Babbar is reported to have said.

It is worth recalling that Masood was given an important role in the Congress party ahead of the last assembly elections despite his controversial past and Islamist streak. It appears that now he has been given the responsibility of being the architect of ‘Dalit-Muslim unity’.

The proverbial Dalit-Muslim unity to defeat ‘caste Hindus’ has been one of the longest running project of anti-Hindu ecosystem. This was tried during the independence struggle as well with some Dalit leaders supporting creation of Pakistan thinking Dalits will be better off with Muslims.

However, the reality of this ‘unity’ was soon exposed after Dalit leader Jogendra Nath Mandal, an associate of Bhim Rao Ambedkar and the first Law Minister of Pakistan, resigned from his post and migrated to India as he discovered that the only way an Islamist can live in peace with a non-Muslim is if the latter converts to Islam.