More
Home Opinions Dear liberals, BJP is treating Triple Talaq verdict as their victory because you are...
OpinionsPolitics
Updated: 12 November, 2018

Dear liberals, BJP is treating Triple Talaq verdict as their victory because you are treating it as your defeat 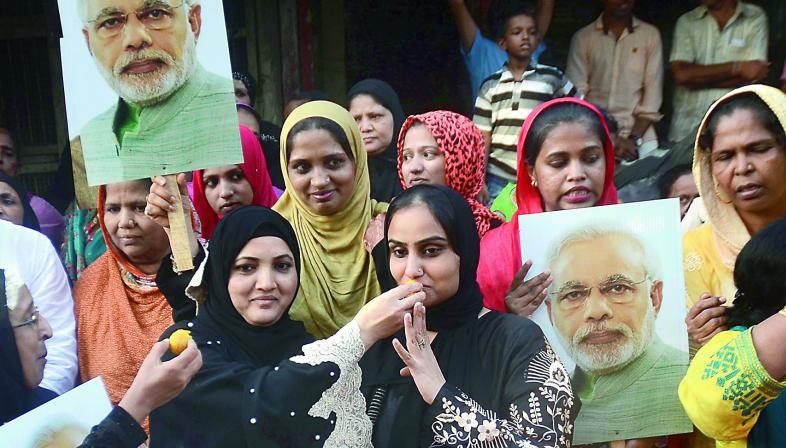 Suffice to say that the landmark judgement of the Supreme Court yesterday did not please everyone. Even as millions of Muslim women celebrated a huge step towards their freedom, the leading lights of India’s secular brigade went into a bout of whining, complaining, and spouting whataboutery.

One of the biggest complaints of ‘liberals’ was that the BJP and Prime Minister Narendra Modi were appropriating “credit” for the Supreme Court judgement. See an example here:

Well, to be fair, the Central Government argued in the Supreme Court against Triple Talaq and so there should be no problem with them claiming their fair share of the credit.

But let’s not get into all those details here. Let’s ask the big, broad question:

Hey liberals, why all the glum faces?

What is holding you back? Is this not a great moment for gender justice? Why not just celebrate?

Instead, the secular brigade seemed to be snapping in frustration.

Some had to scratch their itch to make tasteless digs about the personal life of the Prime Minister, which involves child marriage:

Hey liberals, have you considered the possibility that the reason BJP is running away with the credit for this judgement is that you seem to be treating it as your personal defeat?

Why the confusion, backbiting and whining in liberal circles? In what is perhaps a first, we had the leftists at the propaganda blog Scroll were left wringing their hands about “politically correct issues”.

Reading those words, it seems like the leftists are almost complaining that “political correctness” has kept them from saying what they really felt about yesterday’s judgement!

Leftists just found out that political correctness can be real frustrating. We’ve finally reached peak irony. What a day to be alive …

Why is the left behaving like a deer in headlights? Newslaundry had nothing better to do than obsessively scratching its Arnab itch.

Why is the left so “triggered”? Why is yesterday’s judgement bringing out their most obsessive-compulsive behaviors and activating their nervous defense mechanisms?

Dear leftists, please take a deep breath and try to calm down. It’s gonna be okay. This is not that childhood nightmare where you walk into class and realize that you forgot about an exam that day. This is supposed to be a good thing. You are going to be just fine.

We’re having a party and you are welcome to join. Come on in.

Instead liberals just went into their shell. Some are indulging in Hindu bashing. Some are making jokes on the Prime Minister’s child marriage. Some are scratching their Arnab itch. What to say…

The same sense of gloom seemed to prevail in Opposition ranks. While BJP President Amit Shah read out a celebratory statement, the Congress sent out a low level functionary to “welcome” the judgement in the most terse terms possible. Barely a week ago, when the Prime Minister had mentioned the plight of triple talaq victims in his Independence Day address, the Congress seemed to wince in pain. Like this:

We also had to wait a long time for Rahul Gandhiji, otherwise known for his emphasis on “women empowerment”, to put out his solitary tweet on this issue.

This from the Congress Vice President. Of course, we do not even expect the inaccessible Congress President to actually speak on any issue. Other leaders of secular parties were mostly missing in action, of course.

Perhaps the real reason BJP is running away with the credit on the Triple Talaq issue is that Indian secularism has been so pathetic over the last seven decades. Narendra Modi does not have to do much, if anything at all, to be seen as champion of justice here.

He just doesn’t have to show rampant disregard for the courts and constitution for the sake of votebank politics.  You know, like not following in the footsteps of Bharat Ratna Prime Ministers who passed laws to take justice away from an elderly Muslim woman.

Our Indian secularism has such low standards that Narendra Modi should be a champion today simply because he isn’t going to pass a law bending the Supreme Court verdict to the will of the Mullahs.

Who is responsible for turning Indian secularism into such a joke over 70 years? You tell me, dear leftists…

And so it is today that for 85 million Muslim women of India, Narendra Modi has emerged as the brother they never had.