The Election Commission of India (ECI) has announced the dates for the assembly elections in Madhya Pradesh, Chhattisgarh, Rajasthan, Mizoram and Telangana. As soon as the election dates have been announced, it seems like a section of the media has gotten busy trying to sow discord by peddling lies and half-truth on social media. Two such incidents came to light today.

Recently, large-scale violence has erupted at several places in Gujarat following the alleged rape of a 14-month-old girl in the state. Following the arrest of the perpetrator, attacks on people from Bihar and UP took place in several places in the state including Gandhinagar, Mehsana, Sabarkantha, Patan and Ahmedabad districts in the last one week. The attacks were instigated by hate messages against people from UP and Bihar being circulated on social media.

In this entire incident, Congress MLA Alpesh Thakor had raised the issue of ‘non-Gujaratis’ while raising the issue of justice for the child who was brutalised. A mob of around 200 people, allegedly led by Thakor Sena members, attacked a factory near Vadnagar town of Mehsana district on October 2 and thrashed two employees. Similar violence has happened against people from Bihar and UP in many places in the state, either led by Thakor Sena members or people belonging to Thakor Community.

While Alpesh Thakor has denied these charges, the Congress MLA and his men seem to be smack in the middle of this violence.

News surfaced today that a mass exodus of North Indians is taking place from the affected areas. The Director-General of Police has reportedly said, “If people are leaving for home for a festival, it should not be seen otherwise. I have told my officers to visit residential areas, and if required, visit bus stands and railway stations and if people are found leaving due to fear, (then to) persuade them to come back.”

However, a section of the media seems to have a tough time reporting the truth, the whole truth and nothing but the truth.

While reporting journalist Mahesh Langa wrote an article for The Hindu that finds no mention of the Congress MLA Alpesh Thakor inciting violence against non-Gujaratis in the state, which has now been confirmed by the police.

In an almost concerted effort, controversial Congress leader Sanjay Nirupam who has in the past made distasteful comments multiple times shifted the blame of the violence on Prime Minister Narendra Modi. He said that if people of UP, Bihar and MP are being beaten up and driven out of Gujarat, the Prime Minister should remember that he too has to return to Gujarat to seek votes. Interestingly, the fact that Congress MLA Alpesh Thakor was involved completely got lost in the rabblerousing. This same narrative was even furthered by The Wire ‘journalist’ Rohini Singh who has been caught furthering lies several times. She quoted a person who alleged that non-Gujaratis are being attacked in “Vibrant Gujarat” because of huge joblessness. Rohini Singh, in turn, quoted that tweet and asserted that people from Uttar Pradesh and Bihar should remember this when “people from Gujarat” come to seek votes in 2019.

Clearly, when Rohini Singh said “people from Gujarat” she was hinting at the Prime Minister who is from Gujarat. However, the staggering dishonesty displayed by Rohini Singh was all too glaring considering she, as a ‘journalist’, did not once mention that it was Congress MLA Alpesh Thakor who was in the middle of the violence that broke out in Gujarat. 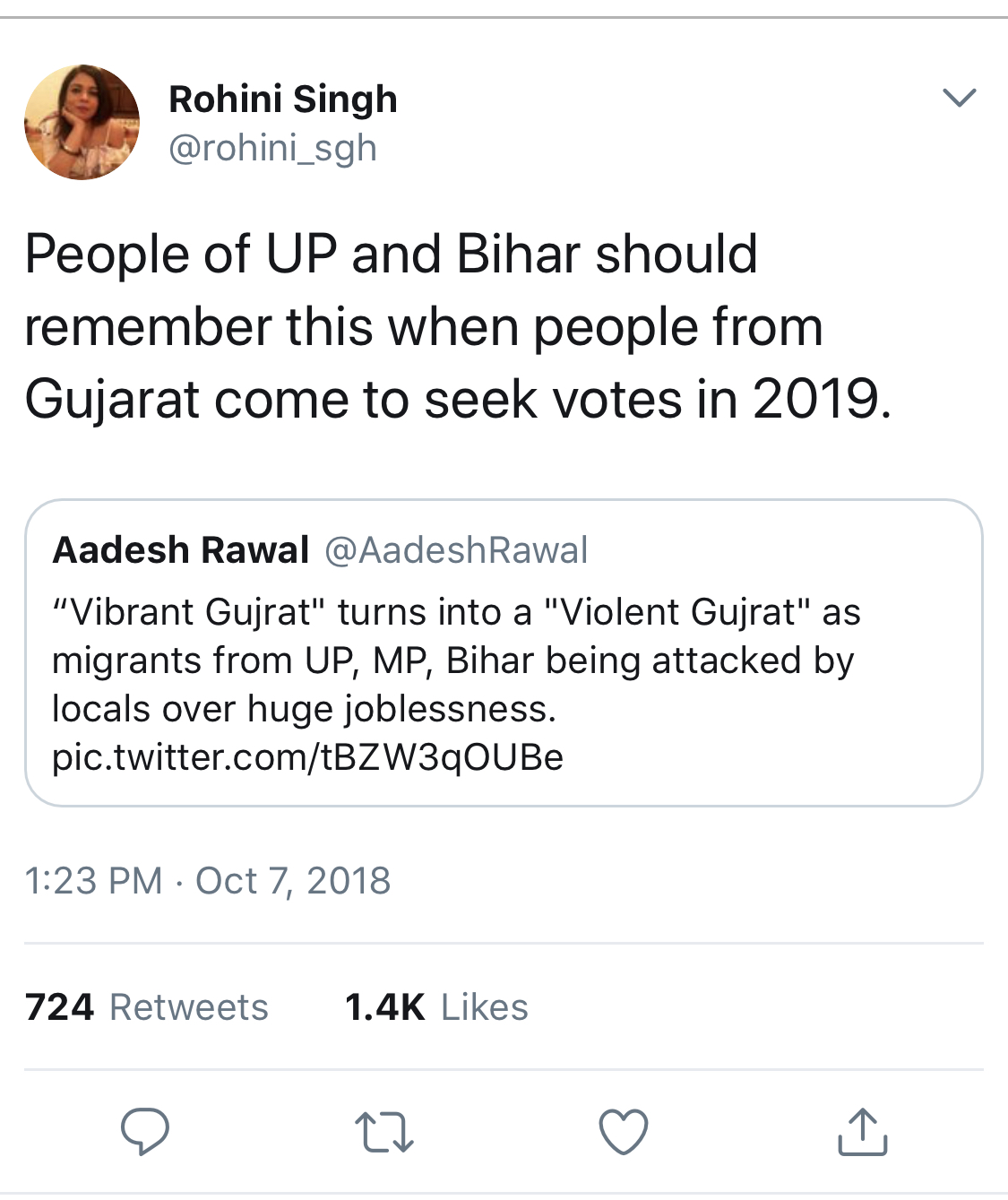 In another incident, some ‘independent’ journalists took to Twitter to add fuel to fire whole sowing discord in the society. Paranjoy Guha Thakurta shared a news article where a 90-year-old Dalit man was allegedly burnt alive while trying to enter a temple in Uttar Pradesh. The same news was also shared by Saba Naqvi, another self-proclaimed ‘independent journalist’ who has been caught lying several times. Interestingly, this news article shared by both these ‘independent’ journalists on the same day is from 2015, when the state of Uttar Pradesh was ruled by Akhilesh Yadav led Samajwadi Party. This news about the 90-year-old too was fake news which was spread by the media. This story claimed that the Dalit man was killed because he entered a temple. This was subsequently picked up by various media outlets. But other media houses reported that the Dalit man was in fact killed by a drunkard. They reported that the Dalit man was going to the temple when he was asked for money by a drunkard. When he refused, the drunkard hit him with an axe, and later burnt his body. This was also confirmed by the District Magistrate. Indian Express also confirmed the money angle and further reported that the deceased was, in fact, coming out of a temple and that to a temple built by members of the SC community. So the bogey raised by Hindustan Times was proved to be totally untrue. We had busted this lie in 2015 itself.

One wonders why an old news of 2015 which happened under the rule of Akhilesh Yadav was drudged up today and also, why a section of the media is towing Congress’ line in obfuscating the fact that Gujarat violence was allegedly incited by Congress MLA Alpesh Thakor and his men.

With the race to 2019 general elections heating up and 5 states heading to polls before 2019, the media seems to be in overdrive to ensure that the crimes of the opposition are whitewashed while holding the Modi government and the mythical ‘rising intolerance under fascist regime’ responsible for every ill perpetuated or enabled by the players of the mahagathbandhan.