MK Venu's argument of sluggish bank credit due to rise in NPAs further validates how excessive credit under the UPA era led to a boost in the investment figures which did not reflect the economic realities of that period.

There’s a lot of talk around the recently released back calculations as it puts into perspective the growth that India experienced from 2005 onwards. It is interesting to note that the new methodology was appreciated by the Former Finance Minister P. Chidambaram when the 2013-14 estimates were revised from 4.7% to 6.9% according to this methodology.

Thus, when the methodology revised estimates of GDP, the Opposition along with the likes of eminent commentators decided to use this revision as a manifestation of the “strong growth” that India experienced under the UPA-II era. However, when the same methodology was extended to the data from 2005 onwards, all those who hailed the “strong growth” have started to question the same methodology. As hilarious or hypocritical as it may appear, I found the reasons given by the article by the leftist propaganda website, The Wire more amusing as it clearly showed their lack of understanding of data, statistic and above all, of economics. There is no doubt that the new methodology is a significantly better one as it takes into account the global best practices. Despite that, the article by The Wire talking about the credibility of the numbers tries to unfairly politicize what is a routine exercise by the government.

MK Venu’s argument is that investment as a percentage of GDP was higher under UPA than under NDA so how can growth be greater under NDA than UPA. The article gets the rationale behind the investment to GDP ratio wrong as it assumes that investments today have a direct impact on growth in the same period. Investments have a lagged effect on growth. Money invested today in a plant would take a couple of years to yield dividends for further growth in future.

Another issue is that a firm would invest only when it needs to add more production capacity to meet further demand in the economy. As a result, investments would be realized once there’s an increase in Capacity Utilization.

Most economists agree that the Indian Economy has had spare capacity since 2011 onwards due to the economic slowdown and this spare capacity came due to “over-investment” from 2007 onwards till 2011 which was fuelled by availability of excess liquidity due to the aggressive lending policy followed by banks: and this is what has led to the rise in NPAs and the current “twin-balance sheet” problem that our banks face.

It is amusing to see basic economic logic being completely disregarded by M K Venu in his article for The Wire as he focuses on a flawed logic to suit a convenient narrative, a narrative that stems more from political considerations rather than economic rationale.

The investment as a percentage of GDP graph shows the same story which explains why there was a build-up of excess capacity in the economy which further led to a collapse of the investment cycle post-2011. It is only in 2014 that the capacity started to pick up and once capacity utilization improved, we can witness investments to increase from 2016 onwards. 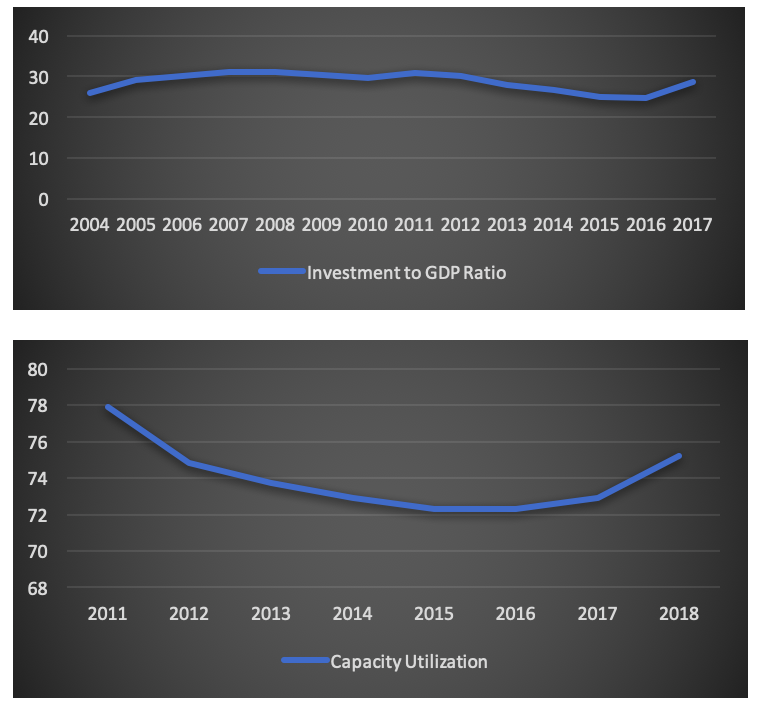 Thus, the explanation of a high ratio of investment during 2007-11 compared to 2014-18 is not a legitimate explanation for two reasons: investments have a lagged impact on growth and that investment under the UPA was fuelled by excessive credit rather than strong economic fundamentals. This is validated when one looks at the excess capacity build-up that occurred in the economy during the UPA era.

Further, his argument in The Wire of sluggish bank credit due to rise in NPAs further validates how excessive credit under the UPA era led to a boost in the investment figures which did not reflect the economic realities of that period. As a result, the investment far exceeded the growth in demand and this led to unutilized capacities which further led to a reduction in subsequent investments. The problem got amplified when economic growth collapsed post-2011 and the twin balance sheet problem started to originate.

Thus, what this new data tells us has been only strengthened by M K Venu’s article; excessive credit-fuelled investments led to overheating of the economy and this was not sustainable. There is no redemption from the gross mismanagement of the economy by the UPA and no matter how many op-eds TheWire publishes, it is well established that the growth under UPA was volatile, did not create ample jobs, it came with a very high inflation and it collapsed significantly post 2011. All of these facts have been further established by the latest release of the data so it is about time that we end the politicization of this data and find solutions to enter into the “high-growth” path.