Interestingly, the same journalist who reported the fake news today had reported in October that Karnataka is already in the process of collecting NRC information. 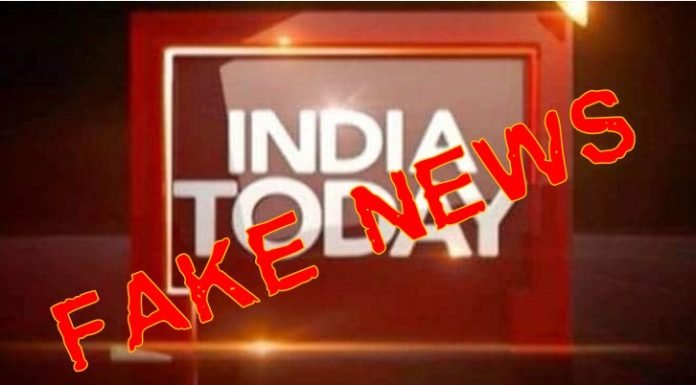 The “liberal-secular” media industry of the country which is openly instigating Muslims to pick up arms against the Modi government over the passing of Citizenship Amendment Act has now resorted to publishing fake news against the BJP government on the issue of implementation of NRC in Karnataka.

In a report by India Today on Saturday, it has been claimed that BS Yediyurappa led government has decided not to implement the National Register of Citizens (NRC) in Karnataka.

The report further stated that the BJP government to create a database of immigrants who have been living in Karnataka instead of implementing NRC.

However, in reality, Karnataka Chief Minister BS Yediyurappa has reiterated that the state government welcomes the Citizenship Amendment Act and asserted that NRC will be implemented in the state. Any decision of the centre including NRC is our decision as well, Yediyurappa had reiterated last week after thumping win in the by-elections.

As India Today realised that they had reported false news regarding the NRC implementation in Karnataka, the media group promptly deleted the report without even apologising for their error.

Funnily enough, if one searches with keywords, the deleted article by India Today and another article that appeared in India Today on the 18th of December on Karnataka appear one after the other.

Funnily, India Today had itself reported that Karnataka CM had said that he will be implementing CAA in the state. One has to logically ask oneself that if a state is implementing CAA, which would it not implement the NRC?

Interestingly, the same journalist who reported the fake news today had reported in October that Karnataka is already in the process of collecting NRC information.

In October, as reported by India Today itself, Karnataka Home Minister Basavaraj Bommai had also said that his department was collecting information on immigrants in the state and will proceed on working toward Assam-like National Register of Citizens (NRC) after a discussion with the central government.

Read: Modi government dispels myths about NRC: Here are 13 FAQs and their answers published by the govt

“There is a talk on the implementation of NRC across India. We are one of the states where people across the border have come and settled down. We are collecting information and will discuss with Union home ministry and go ahead,” Bommai had said.

One has to wonder how India Today and the journalist himself missed their own reportage in the past to peddle fake source-based news today only to delete the news later.

Karnataka government’s decision to implement NRC comes after Union home minister Amit Shah had repeatedly called for a nationwide NRC. Several other party leaders from Haryana, Uttar Pradesh, Delhi and Tripura have also demanded the exercise across the country.