Kunal Kamra took to Twitter to upload a partial video where he was seen heckling Arnab Goswami, who is trying to ignore Kamra behaving like a lunatic 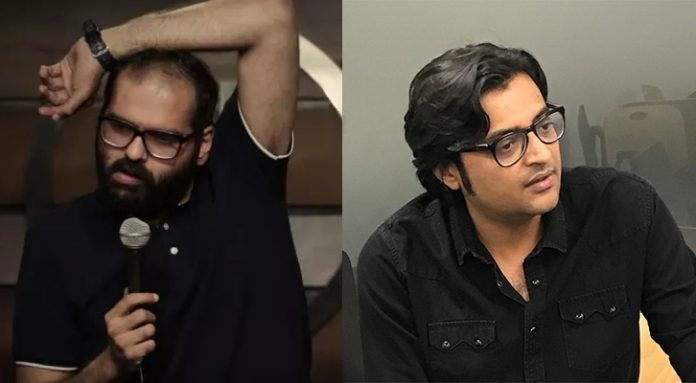 Delighted for getting something new to chew on, the usual set of assorted ‘liberals’ today invaded the microblogging site Twitter with tweets endorsing propagandist Kunal Kamra’s unruly behaviour toward Arnab Goswami. Comedian Kunal Kamra had abused and heckled Republic TV editor Arnab Goswami on an Indigo flight from Mumbai to Lucknow.

His unruly and felonious behaviour won the ‘comedian’ accolades from many likeminded lamebrains who also used the opportunity to vent their hatred for the unreserved journalist. Heading the list was senior Congress leader Shahi Tharoor who is accused of ‘abetting his wife’s unnatural death’. The Congress loyalist extended support to Kunal Kamra by saying that ‘it was time someone gave him (Arnab Goswami) a taste of his own medicine’.

The truth is that it was time someone gave him a taste of his own medicine. These are the words he regularly uses to berate his innocent victims, except he does so in a hectoring, bullying manner & at higher volume & pitch than @kunalkamra88 does in this video. https://t.co/e94B8WcEtj

Read- ‘Mentally unstable’ Kunal Kamra abuses and heckles Arnab Goswami on a flight to Lucknow: Here is what actually happened

Ashok Swain, who somehow never misses encashing opportunities to spew venom, took a dig at the journalist saying that he was surprised how Arnab remained stoic. “….surprised that Arnab remained quiet for 2 minutes in front of a camera!:, exclaimed the habitual fake news peddler, Ashok Swain, who is known for his anti-India and anti-Hindu posts.

Moving on, the ’eminent’ liberal thinker, Shivam Vij of Shekhar Gupta led The Print, accused of inventing fake quotes and twisting facts to peddle liberal propaganda, appeared brimming with enthusiasm to call out senior journalist Arnab Goswami. Calling him a “mountain of poison” the Print’s contributing editor said that Arnab deserves this and a lot lot more and that he supports Kamra.

Kunal Kanra did nothing as compared to what Republic TV and its reporters do every day many times a day: heckling. Arnab Goswami is a mountain of poison. He deserves this and a lot lot more. I support Kunal here. https://t.co/riIM4ucXpK

Another permanent member of this leftist cartel, Meghnad, a columnist with the left-leaning website Newslaundry, also took to Twitter to jeer the senior journalist Arnab Goswami.

Hilarious how when he is confronted by his imaginary “Tukde Tukde Gang” outside the studio, the man is completely silent.

Similarly, a co-founder and collaborator of comedy platform All India Bakchod, Tanmay Bhatt, accused of sexual assault, also took to the social media platform to hail Kunal Kamra claiming that following this publicity his ‘vlogs are off to a good start’.

Kunal’s vlogs are off to a good start.

In what appeared to be a massive security breach, ‘mentally unstable’ ‘comedian’ Kunal Kamra had abused and heckled senior journalist Arnab Goswami on a flight from Mumbai to Lucknow. Kunal Kamra then took to Twitter to upload a partial video where he is seen heckling Arnab Goswami, who is trying to ignore Kamra behaving like a lunatic. He also tweeted that he gave Arnab Goswami a ‘monologue’ about his journalism. Kamra, brazenly, ended the tweet with ‘F*ck Arnab’ and wrote that Arnab refused to answer him and called him mentally unstable.

As divulged by a co-passenger who got in touch with OpIndia, Kunal Kamra got increasingly abusive and aggressive, almost trying to hit Arnab Goswami, until the flight crew intervened and told him to take his seat.

While Kamra tried to paint this as some sort of crusade in favour of ‘journalism’ and a tribute to his hero Rohit Vemula (a student who tragically committed suicide and a trail of vultures fed off him for mileage), the truth was far from it.

Due to this stunt, Indigo has banned Kunal Kamra from flying the airline for six months, saying that his conduct onboard was unacceptable behaviour. After the decision by Indigo, Civil Aviation Minister Hardeep Singh Puri other airlines also to ban the bully from their flights.