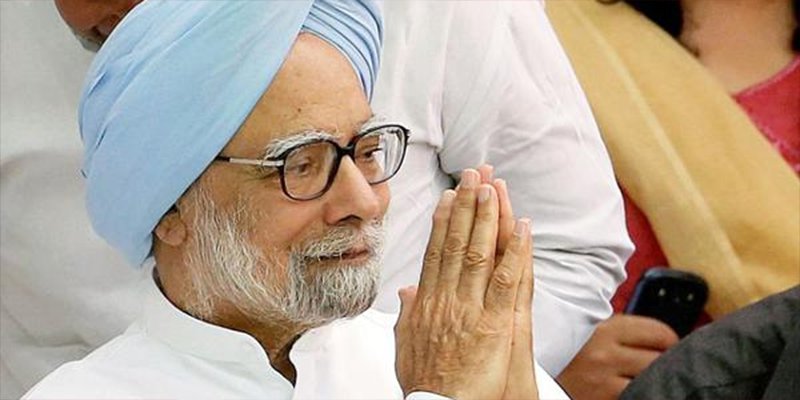 With the Gujarat elections fast approaching, Congress’ desperation seems to have risen substantially. On the last day of campaigns, today former Prime Minister Manmohan Singh addressed the Media in Rajkot. His speech was laced with some often repeated lies and some laughable statements aimed at perhaps creating a false image of Narendra Modi.

One such statement which has been repeatedly rebutted was that Narendra Modi had never discussed the Narmada issue with Manmohan Singh.

Modiji says he took up Narmada issue with me but I don’t remember him talking to me about this issue, though whenever he wanted to meet me I never refused,was always ready as being PM it was my responsibility to meet all CMs: Dr.Manmohan Singh pic.twitter.com/0dUqcmRDf5

This issue had also come up early November when Chief Minister of Gujarat, Vijay Rupani had rebutted this claim threadbare with documentary evidence. Vijay Rupani had said that Manmohan Singh was lying. Narendra Modi had not only met and discussed the Narmada issue with Manmohan Singh in 2011 and 2013, but had also written several letters to the then Prime Minister Singh, raising this issue. In Fact, on 8th November 2017, Rupani had shared several letters that were exchanged between the two. As per these latter, Narendra Modi had written to Manmohan Singh urging him for the “construction of spillway piers to its full height and bridge as well as installation of gates (to be kept in raised position) on Sardar Sarovar dam over Narmada”.

Rupani at the time had told the reporter :

“Instead of giving an explanation to the people of Gujarat for delaying the Narmada project, Singh resorted to telling total lies about meeting Modiji. These documents clearly show that Modiji had not only written to Singh several times, but also met him to represent about the stalled work on the dam.”

“Modiji made a representation when Singh visited Gujarat in March 2011. It is also on record that Modiji held a meeting with Singh at the PMO in February 2013 and discussed the issue for almost 45 minutes. Despite that, Singh is claiming that Modiji never met him over the issue,”

In fact, Narendra Modi had observed a 51-hour fast in 2006 since the Congress government headed by then Prime Minister Manmohan Singh refused to grant permission to raise the height of the dam citing incomplete rehabilitation work.

While this lie has been decimated with documentary evidence, it is a mystery why Manmohan Singh would feel the need to repeat it.

Dr Manmohan Singh’s next statement was about how Prime Minister Narendra Modi’s decisions and foreign policy have had adverse effect on the country.

Our national security has been hurt by the inconsistent foreign policies of this government. Some steps taken by the Modi govt were not in the best interest of the country: Former Prime Minister Manmohan Singh pic.twitter.com/PUumay0vyp

This statement was exceptionally startling after recent revelations of how the then Congress government had decided against conducting a surgical strike on Pakistan after the dastardly 26th November 2008 terror attack.

“The strike was supposed to be 100% successful and then after that, we were supposed to put such a defence that Pakistan would not find us on their radar. We had the upper hand on the whole issue. We had to choose a target system which would pass a message to the whole of Pakistan, that don’t mess with us. Unfortunately, we did not get a go ahead.”

“We don’t take action without the clearance from the government. We gave the government many options that we could have easily carried out, but we wanted hard intelligence. Gathering information is the job of the intelligence agency of the country, but we got nothing. What we got was mix bag. We wanted correct information.”

This coward couldn’t even speak to the nation after 26/11 let alone respond to it
A disgrace to his community, to his nation, to his post. https://t.co/20OAhNS50P

Yes. The surgical strike was not good for Pakistan. https://t.co/Sk6r1zP84A

Don’t you have any self respect or dignity, man? https://t.co/V7dk4wewQ8

However, the most laughable was Manmohan Singh’s statement regarding corruption during the UPA regime.

Whoever faced corruption allegations during UPA was dealt with strictly, but the same cannot be said about BJP, they have not acted on corruption in their rule: Dr.Manmohan Singh pic.twitter.com/H1KXMekAgA

This statement drew sharp reactions from people. It was hinted to him that the Coal Scam took place while Manmohan Singh was the Prime Minister and he also had the charge of Coal Ministry at the time.

Sir do you remember Coal scam while being the PM since you also had the charge of coal ministry? https://t.co/iScXbYFZa0

He spoiled my lunch. Threw away laughing uncontrollably at Mannu bhai’s joke. https://t.co/s6KKX6iAvB

His next statement was regarding the economy.

To equal the UPA’s ten year average, the economy will have to grow at 10.6% in the fifth year, I would be happy if it were to happen but I frankly do not think it will: Dr.Manmohan Singh in Rajkot #GujaratElection2017pic.twitter.com/kFEq1MPIHa

One is reminded of Prime Minister Modi’s statement regarding this issue :

“Some people enjoy spreading pessimism, they sleep well at night after that. For those people, a dip in growth for one quarter becomes doom. Is it the first time growth fell to 5.7%?

He also spoke about how in UPA’s regime, growth rate fell below 5.7% 8 times.

Twitterverse too reacted sharply to this statement :

Forget everything else dishonest Mannu is saying; at least world’s greatest economist should also have taken inflation of both periods for comparison, no? https://t.co/ixUiv3QiGT

For UPA the foundation was set by NDA which helped you, and this Govt got a disaster called UPA https://t.co/8LoqNEjKpM

Dr Manmohan Singh’s statements were thought to be in bad taste too.

Dr MMS says it is a “pipe dream” to imagine that India could be a developed nation in 5 years. While I agree that he is right on the target, it is near depressing hearing a 2 term PM sounding so Cassandra like. He also added RG will lead India to prosperity. pic.twitter.com/oF2fcjK6mD

While the Congress government reaped the benefits of the preceding Atal Bihari Vajpayee government during its first tenure, during its second tenure the GDP growth rates had fallen to abysmal standards of 4.5% and that is the legacy that the Narendra Modi government inherited.

This is however not the first time Manmohan Singh has lied during campaigning. As mentioned, he had lied about the Narmada issue before. Before he started his campaign, Vijay Rupani and Himanta Biswa Sarma had also taken him on about his shoddy policies. With Manmohan Singh finally speaking up, we can only hope that moving forward, he will stick to the truth.