It requires special skills to drag in Hindus for rape threats to a Muslim woman by rabid Islamists, and this skill was displayed by a communist last night on Facebook. The Muslim woman here is a JNU ‘student leader’ named Shehla Rashid and communist is a ‘women’s rights activist’ named Kavita Krishnan.

Shehla had earlier wrote a Facebook post in wake of murder of a Hindu boy Ankit Saxena, who was killed by the family members of his Muslim girlfriend for falling in love with her. In her Facebook post, she had asked her ‘Muslim friends’ if they would let their sisters and daughters marry a non-Muslim man of her choice. She expected Muslims to say they’d allow so, in order to retain moral rights against the concept of ‘Love Jihad’.

However, the reactions to her posts were just opposite to what she thought her Muslim friends will come up with. As our report had highlighted, many Muslim users commented on her post condemning her for asking such a question. Some declared that they will choose Quran – which prohibits marriage of a Muslim woman with a non-Muslim man – over the constitution of India that allows inter-faith marriages. One user even supported the killing saying it was the ‘final solution’ to maintain ‘prestige of houses’.

Now it appears that not only such Muslim users disagreed with Shehla vehemently, some of them went ahead to issue rape threats to her for having spoken about rights of Muslim woman to marry a non-Muslim man.

(Update: obscene abuses and rape threats were apparently issued to Shehla in response to another Facebook post, where she had asked her ‘Muslim brothers and sisters’ to reject a conspiracy theory, ironically floated by a Congress supporter who himself had issued rape threats a few years ago. The conspiracy theory claimed that ‘right wing’ had killed Ankit Saxena. A screenshot of the abuses – strong language disclaimers apply – can be seen here)

This forced Shehla to deactivate her Facebook account, as claimed by Kavita Krishnan. Krishnan, who, ironically, is the Secretary at All India Progressive Women’s Association, and throws women’s rights out of the window when it comes to defending sexual offenders from the Left-Liberal cabal, came out ‘in solidarity with’ Shehla over this incident.

In a post on Facebook, Krishnan condemned the ‘misinterpretation’ of Shehla’s post by rabid Islamists, only to soften the blow, if there was any, by implying how ‘hateful rape threats’ by these men were not as bad as patriarchy of Khaps and ‘Sangh’. In her post, Krishnan explains to Muslim fundamentalists who abused Shehla and issued rape threats to her, that Shehla never meant to ‘encourage’ Muslim woman marrying Hindus. Instead of outrightly condemning those who issued threats and asking for police action against such criminal behaviour, Krishnan laments that this episode will be used by ‘right wing Sanghis’ to brand Muslims as ‘backward and patriarchal’.

If that apologia was not enough, Krishnan went on to say that Khap is way more ‘dangerous’ and patriarchal since it has ‘state backing’ and court and police support the Hindu upper caste patriarchy and ‘cooperate’ with it, unlike the Muslims.

Borrowing from Delhi Chief Minister Arvind Kejriwal, this statement by Krishnan is “Shocking” to say the least. Krishnan’s contention that Islamic patriarchy doesn’t get state support is an absolute lie. That it comes after the nation had debated the instant triple talaq issue at length also shows the brazenness with which communists like Krishnan peddle their agenda.

It should be noted that the state sanctions the personal laws of Muslims, which legitimised the practice of instant triple talaq, which is as patriarchal a practice as it can get. The practice continues unabated even though the Supreme Court termed it null and void last year. A law that sought to punish the practice got stuck in the parliament, as opposition leaders and even ‘activists’ like her termed the law ‘majoritarian’ and indulged in whataboutery:

Supreme Court has already made instant triple talaq illegal. I fought tooth & nail for it
Sending men to jail for something which is on any case null & voud makes no sense.
I agree with Sule. Send them to family courts not jail
Let’s now fight against marital rape.

#JaipurHonourKilling Why’s Govt, which is so vocal on triple talaq, so silent on women’s groups’ demand for law against ‘honour’ crimes? 1/n

The biggest example of state supporting Muslim patriarchy, which Krishnan denies, is when Rajiv Gandhi led Congress government overturned the landmark Supreme Court judgement in Shah Bano case, which granted her alimony from her husband who divorced her.

There are many other aspects of the shariyat law, which is the basis of personal laws of Muslims in India, which are patriarchal, such as unequal share in property, polygamy, etc. and all these aspects are sanctioned by the state in form of personal laws, yet, for Krishnan, the state backing does not exist. Unless Krishnan believes Sharia is same as feminism, what she just said about Muslim patriarchy and state support is truckloads of nonsense.

Further, Muslim patriarchy also enjoys the backing via the clout of the community. Law enforcement officers tend to think twice over ‘interfering’ in a ‘communally sensitive’ issue. Most of the ‘Muslim leaders’ and clerics have routinely and openly taken stand that can hardly be called ‘feminist’. Yet, for Krishnan, this is not as bad as Khap.

Not just state and ‘community’ support, Muslim patriarchy gets direct and indirect “intellectual support” too, because the self-styled liberals and ‘seculars’ in India go soft on these issues in the name of minority rights. Following statement by a former Editor of left-leaning newspaper The Hindu is an example of that: 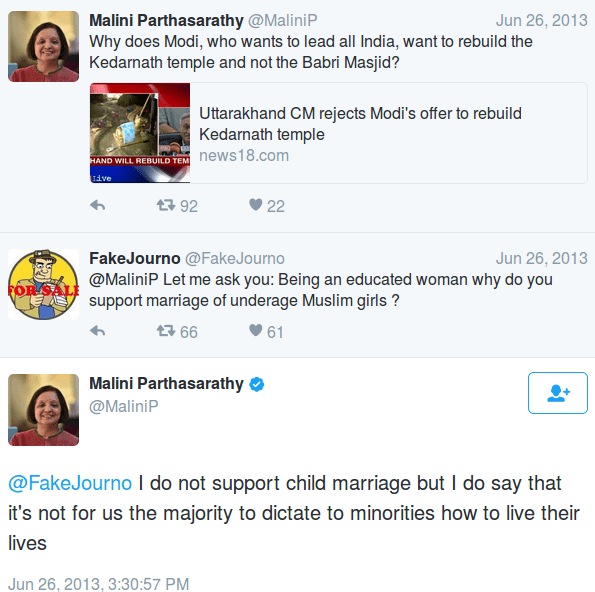 Krishnan’s Facebook post itself is an example of how Muslim patriarchy gets ‘intellectual support’ because she brings in Khaps, Sangh and other people and refuses to unequivocally condemn it.