After vicious violence was unleashed in the Shah-e-Alam area of Ahmedabad, several people have been detained by the Ahmedabad police including Congress Corporator Shehzad Khan Pathan. 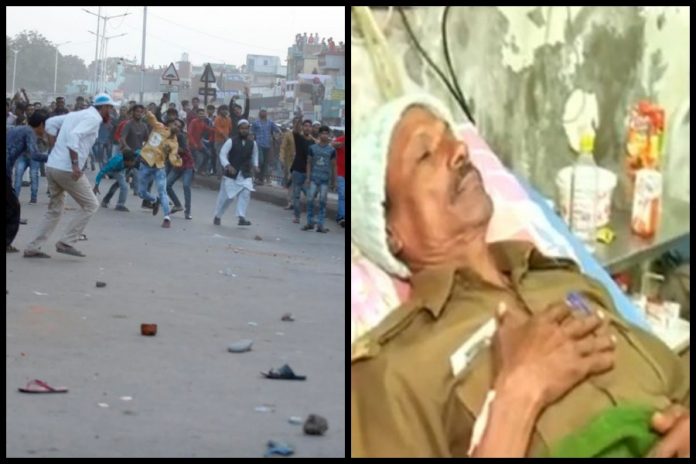 On 19th December 2019, in an anti-CAA riot, a raging Muslim mob had gone on a rampage in the Shah-e-Alam area of Ahmedabad. The mob had mercilessly pelted stones at policemen and when one policeman stumbled while trying to escape to the bloodthirsty mob, they almost lynched him. The injured cops have now spoken up and revealed details about how the mob started pelting stones during the anti-CAA riots.

According to Desh Gujarat, a Maninagar Police Station staffer said that the mob had gathered at a Durgah before coming out with heavy stone-pelting against the police force deployed in the area in the face of the anti-CAA riots.

Another cop, JM Solanki, the Inspector of Isanpur Police station has said that a strong mob of 2,000 to 3,000 rioters went on a rampage after Namaaz was read.

Reportedly, the riots broke out in the area after Muslims were adamant about holding protests even though the permission for the rally had been denied. According to Desh Gujarat, over 17 police personnel have been injured in the indiscriminate stone-pelting by the Muslim mob. The personnel injured included one ACP and one PI rank. 2 women have also been injured in the mob violence.

After vicious violence was unleashed in the Shah-e-Alam area of Ahmedabad, several people have been detained by the Ahmedabad police including Congress Corporator Shehzad Khan Pathan.

Several Muslim dominated parts of Ahmedabad saw shops being closed and regular life coming to halt on the 19th of December.

Read: Who is instigating violence in colleges: Congress, NSUI, a sinister WhatsApp group and anti-CAA protests

That the violence in the Shah-e-Alam area broke out after Nazaam is not surprising. An eyewitness account from West Bengal also states that before a train was attacked by a mob, there was Namaaz being read from the nearby place of worship. In fact, in Seelampur, Delhi, where a raging mob had indulged in stone-pelting and even attacked a school bus, it is reported that even after tear gas shelling and lathi charge by the police, the crowd had refused to disperse, however, the mob had suddenly dispersed after azaan from a nearby Mosque.