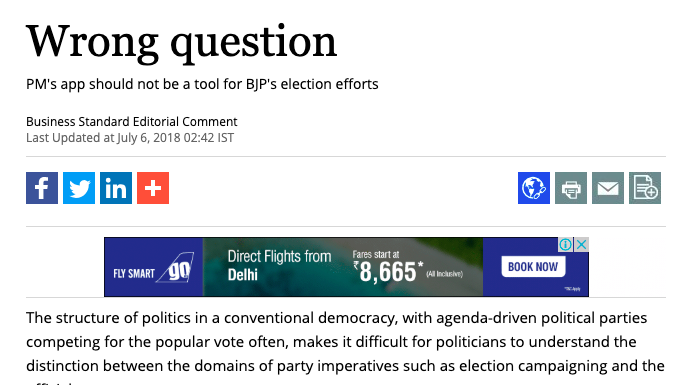 Newspaper Business Standard on Wednesday published an editorial titled, “Wrong question”, where it sought to attack PM Modi for the way his mobile app – Narendra Modi (commonly known as NaMo), is being run.

The article which was written by the editorial team of the newspaper picked an issue with what it claimed was a lopsided manner of running an app. The editorial after pontificating about the supposed blurring of lines between, “election campaigning and the official governance process” asserted that PM Modi should understand the difference between the two.

Following this, the editorial proceeded to prove how PM Modi was failing to do so.

The example they gave was about the app running an online survey which it claimed, catered to the BJP’s key agendas for 2019. It claimed that some of the questioned posed included asking about the views parameters for voting and inquired whether they would be interested to be volunteers for the BJP.

The editorial thus explained that the questions would have been perfectly acceptable had, “the prime minister launched this survey on his party’s app, maintained by the party’s own elaborate IT establishment”.

But it contended that it was improper to carry out such surveys on the IT infrastructure maintained by the government which was in the end, funded by the taxpayer.

In a nutshell, the Business Standard editorial contended that the handlers of the NaMo app should be balanced in their approach as it was being hosted over the government’s IT infrastructure, and not by the BJP’s setup.

Incidentally as pointed out by Twitter user Akhilesh Mishra, the whole logic provided by editorial was flawed as the app is being hosted by the BJP’s IT infrastructure and not by the government:

The Business Standard (@bsindia ) has an editorial today, no less, which is based on absolute fiction. The Narendra Modi app is NOT run by the Government but by the BJP. It is clearly declared on the play-store. Yet, BS first concocts a fact and then indulges in moralizing. 1/2 pic.twitter.com/wQymN1L8jd

As detailed by Mishra, if one goes to the home page of the app on Google Play, and scrolls down to the additional information section, they can clearly see that the app’s developer is the BJP and not the Indian government:

Hence clearly, by Business Standard’s own logic, if the app is being run by the BJP, they are entitled to run whatever surveys they want and ask whatever questions they want.

This episode thus raises the question as to why did Business Standard’s editors (who wrote the article), not carry out a basic fact check which would have taken barely five minutes to complete.

It also makes one wonder whether the article was a deliberate effort at defaming the Prime Minister, with the editorial team hoping to get away with it; or were they so consumed with putting the article across that they choose to let editorial standards (assuming there are some) go for a toss.