The administration of the state-run All India Institute Of Medical Sciences (AIIMS) in Delhi has demanded a response from the president of the Resident Doctors’ Association (RDA) of AIIMS Delhi to explain “political” social media messages praising Aam Aadmi Party and calling BJP ‘facist force’ posted from its Twitter account on 12 February.

The Resident Doctors’ Association (RDA) of AIIMS Delhi had taken to Twitter a day after the Delhi assembly elections results were announced to make a political opinion on behalf of the AIIMS medical community. In a tweet, the RDA not only celebrated the victory of Arvind Kejriwal-led AAP but also claimed that it was an election that defeated ‘fascist forces’.

The RDA of the AIIMS then congratulated AAP and Delhi CM Arvind Kejriwal for a great victory in the Delhi elections. In a second tweet, Resident Doctors’ Association of AIIMS claimed that it was a sense of relief for them to see ‘fascist forces’ losing at least on one front as in recent times it was really painful to witness fascism rising in the country. The RDA further alleged that the fascist forces had attacked the medical units that were providing emergency healthcare. Following these statements, a controversy had erupted as social media users and civil society members condemned the unethical behaviour of the AIIMS Resident Doctors’ Association, which was actually supposed to be politically neutral. Facing widespread criticism, the tweets were subsequently deleted.

Responding to the controversy, the AIIMS Registrar has now written a letter to the RDA president to explain his act of using official social media handles to tweet political posts.

“The content of this tweet was political in nature on the Delhi State Assembly Elections. It has also been brought to notice that this tweet was posted by the President of the RDA,” the letter reads.

The letter further said, “This has been viewed seriously by the Competent Authority. President, RDA is required to give his explanation regarding the above tweet within 48 hours from the date of issue of this memorandum.”

Copies of the letter, dated 21 February, have been marked to the Director and the Dean of AIIMS Delhi.

Interestingly, Adarsh Pratap Singh, who is the President of the RDA AIIMS, was caught posting the same post on his Facebook account after the results of the recent Assembly elections in New Delhi. 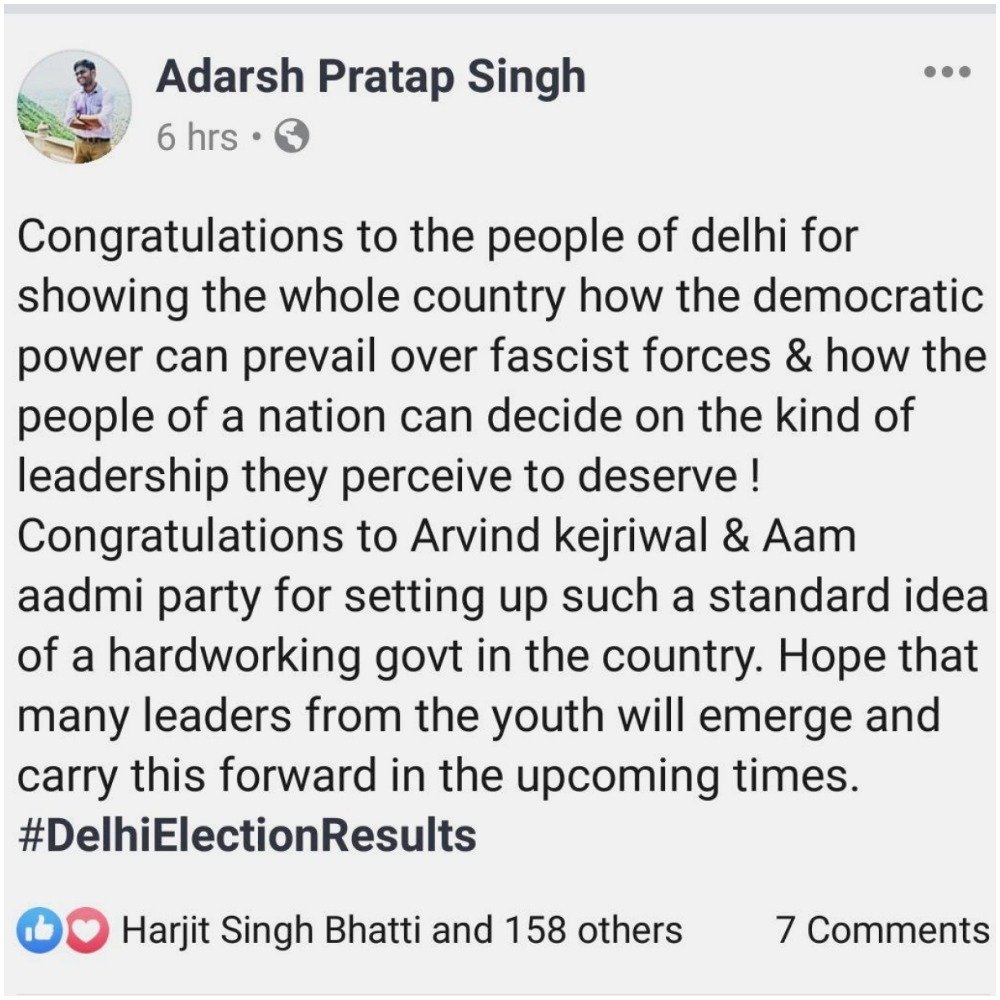 The Swarajya reported that they tried to contact Adarsh Pratap Singh, the President of the RDA AIIMS. However, he disconnected the call after he realised that he was speaking to a journalist.

A doctor at AIIMS, on condition of anonymity, has also revealed that the tweets had created quite a furore among the RDA members as well the larger doctor community in AIIMS and other Centre-run institutes, and therefore they were subsequently taken down.

The doctor also shared a message of Singh on a WhatsApp group after deletion of the tweet, which reads, “Dear Residents, The tweet regarding winning of AAP yesterday was my personal opinion. I apologise for posting it on the official RDA Twitter handle since it represents the entire AIIMS Residents community and it caused inconvenience to the ones who do not think alike (sic).

Saurabh Sachar, who is senior resident and Governing Council Member of RDA of central government-run Safdarjung Hospital and Vardhman Mahavir Medical College, said,”RDAs are apolitical organisations and basically mandated to work for the welfare of resident doctors. The political views that their members hold are individual and RDA platforms should not be used to propagate them.”

It is important to note that following the riots that were allegedly unleashed by left-wing forces in the JNU campus, several injured students of Jawaharlal Nehru University (JNU) who are associated with the Akhil Bharatiya Vidyarthi Parishad (ABVP) had alleged “discrimination” on the basis of ideology by doctors at AIIMS Delhi in January.

A doctor, who had issued ‘official’ statement to media on behalf of AIIMS are the violence at JNU, Dr Harjit Singh Bhatti, was found not to be associated with AIIMS, and he is only former president of the Resident Doctors’ Association at AIIMS. He is also activitely involved in anti-CAA protests. Despite being an outsider, he was allowed access to AIIMS wards where the JNU students were being treated.