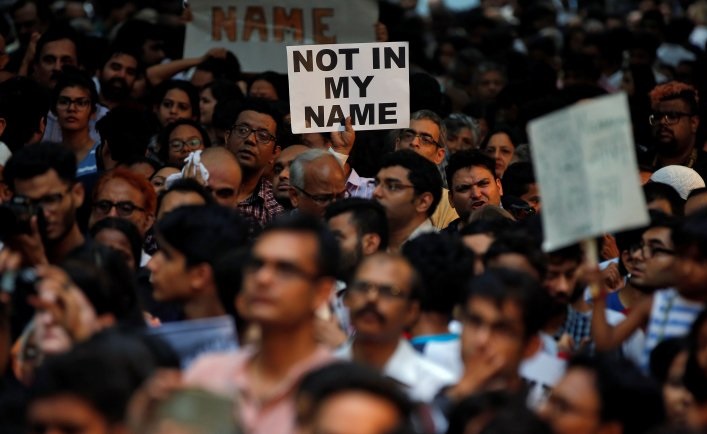 In the recent Lynchistan debates, the data assembled by the scientist and writer Anand Ranganathan was quoted widely, on TV and social media, to dispel the fake Lynchistan narrative. A counter set of data, being repeated ad-nauseum these days, uses reports in the English language media as raw data (data set included reports from unreliable websites like Catch News, whose journalists have been caught spreading fake information many times) to prove that there indeed is a rise in cow related violence.

This is most absurd enough use of data, because the main criticism of those who disagree with branding the country as Lynchistan, is that the narrative is being pushed by the English language media, which has inherent bias against a particular ideology and thus it is wired to churn out biased reports.

To suggest that this media bias is some “conspiracy theory” is as naïve as believing that government is never wrong. It is not rocket science to realise that the mainstream media has a “liberal” bias. So much so, that renowned thinker and media critic Noam Chomsky once said that “if the system functions well, it ought to have a liberal bias” (emphasis added).

Almost every journalist identifies himself or herself as “liberal” and flaunts this identity and swears by this allegiance. There have been open admissions that the media used to “downplay” various incidents earlier, lest it leads to communal tensions – something television journalist Rajdeep Sardesai refers to as “moral compass”. The same Sardesai had given “political context” to killing of a person who was saving cows and virtually termed it a lesser crime when compared to killing of a person who wants to eat a cow.

The question is not whether the mainstream media has a “liberal bias” – it obviously has, and it is so as a matter of ingrained principle – but what does being “liberal” mean in India. And that’s is an open and relevant debate.

At OpIndia, our belief is that liberalism has been corrupted beyond recognition in India, with the mainstream media leading this “corruption”. Therefore, any research or analysis based on trends in news reports churned out by the same biased media is pointless. Such conclusions are as good as result of any Twitter poll.

However, that leads to a valid counter question that if we are not ready to accept a conclusion based on biased English language media reports, why should we accept the arguments made by Anand Ranganathan, who also used the reports by the same media.

On our part, we did not see him throw any numbers or graphs – as the other “research” articles are doing – to back his claim. His moot point was that mob lynchings – including cow related and communal ones – was hardly a new phenomenon that saw “alarming” rise under Modi.

Still, we asked him to elaborate on why he felt there was a need for this data and what this data actually meant. Following is his response.

The whole point of my collecting rudimentary data was:

2013. Just 1 year out of 10 under UPA. Rudimentary search reveals more than a dozen lynchings. Guess it was Hindustan then, not Lynchistan. pic.twitter.com/v3qYSTFwRu

2012. Again, 1 yr out of 10 under UPA. Rudimentary search: 16 lynchings, including communal/caste. But it was Hindustan then, not Lynchistan pic.twitter.com/0eGhLjNuBk

A few points on India now being called Lynchistan. Media refuses to learn from its past mistakes. Maybe it doesn’t see them as mistakes. pic.twitter.com/JsDwyuMYOs

2016. Just 1 year. Instances of mob violence where the mob belonged to the Muslim community. [Please read the accompanying note.] pic.twitter.com/RVpcLt7PHM

Few quick points from a reading of the interesting Indiaspend piece on Cow-vigilante attacks. pic.twitter.com/V6vUCiVQTr

That use of news to point to *existence* of an alternative narrative is valid. data scientist’s use of news reports to prove “spike” isn’t.

Nonetheless, I am happy that my tweets have led people to focus on data and its use in the media.