The organisers and supporters of the 'protests' are now fuming against the opposition leaders, especially Arvind Kejriwal for deserting them and are questioning their silence on the anti-CAA protests at Shaheen Bagh. 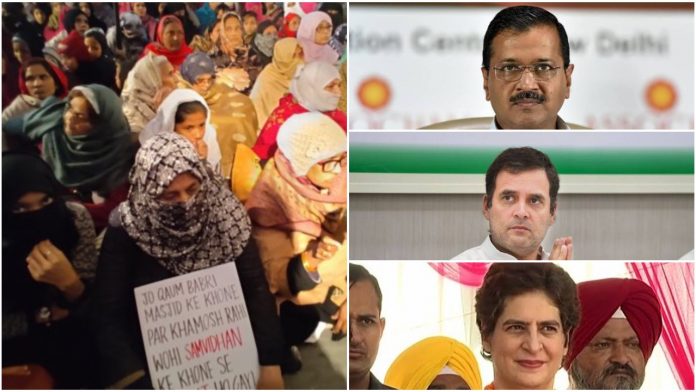 As violent protests by Muslim mobs across the country against Citizenship Amendment Act (anti-CAA riots) could not achieve any substantial gains, the Islamists have now come up with another staged ‘protests’ at Shaheen Bagh, where women are being applauded for capturing a bus stop and essentially blocking a highway to ‘protest’ against the Citizenship Amendment Act. It seems that the protestors at the Shaheen Bagh had expected some sort of political support to market these ‘protests’. However, the opposition party leaders like Gandhi-scion Priyanka Vadra and Rahul Gandhi of Congress, Delhi Chief Minister Arvind Kejriwal and Manish Sisodia have simply overlooked these anti-CAA protestors, triggering Islamists and ultra-left elements who are backing these so-called peaceful protests.

After Congress started receiving widespread criticism for their support to Islamist mobs that went on a rampage in various parts of the country, Congress is now beginning to keep mum on these ‘protests’.

Read: Congress wants Yogi Adityanath to resign because he would not let Islamists and politicians burn UP during anti-CAA riots

The organisers and supporters of the ‘protests’ are now fuming against the opposition leaders, especially Arvind Kejriwal for deserting them and are questioning their silence on the anti-CAA protests at Shaheen Bagh.

Another protestor claimed that there are daily protests going on at Shaheen Bagh, where women are protesting with their small kids in cold winter but Delhi Chief Minister Arvind Kejriwal has not been there even once.

There’s daily protest going on at Shaheen Bagh, women are protesting with their small kids in cold winter. And, Arvind Kejriwal hasn’t been there for once! That’s not done.

Another attacked Arvind Kejriwal for his absence from anti-CAA protests. She said the absence of Kejriwal meant that he has disassociated from the ‘Muslim’ optics which showed how cheap Muslim lives are for him.

Not to forget his absence from Daryaganj, Kalkaji & everywhere.

He can wilfully disassociate from the ‘Muslim’ optics but that only shows how cheap Muslim lives are for him.

Not a CM I would root for.

Some others even questioned Gandhi-scion Priyanka Gandhi Vadra for not extending her support to the Shaheen Bagh protests.

The opposition parties especially Aam Aadmi Party seems to have learnt their lesson hard way. Arvind Kejriwal who once sided with the anti-India establishment in JNU episode and his subsequent demand from the armed forces to submit proof for both surgical strikes and Balakot airstrikes had not gone well in the electoral politics.

As Delhi elections are just months away, Delhi Chief Minister does not want to side with Islamists and ultra-left wing elements fearing a backlash from majority nationalist Hindus. The Aam Aadmi Party seems to have consciously chosen not to join hands with these protestors at a time they are already losing tractions in the Delhi after one of their ministers Amanatullah Khan openly incited Muslim mobs in Delhi to indulge in violent protests during anti-CAA protests.

However, it is interesting to see why both Priyanka Gandhi Vadra and Rahul Gandhi are tightlipped on Shaheen Bagh protests. Priyanka Gandhi, who had visited India Gate to support violent mobs has chosen not to extend her support to Shaheen Bagh following the backlash that her party faced across the country.

It is pertinent to note that several Congress leaders have been booked for the anti-CAA riots by Muslim mobs that have gripped the nation.

The crime branch of Ahmedabad police had nabbed a Congress leader for posting a fake and misleading video on social media which incited a Muslim mob during a protest march at Shah-e-Alam, Gujarat, where several police officials were brutally attacked by Muslim mobs.

Congress party’s minority cell member Umar Khan Pathan had shared a video on social media in which a police action against rioters from Lucknow was passed on as an incident in Ahmedabad stoking violence in the Shah-e-Alam. The fake news had unleashed a violent Muslim mob, who attacked and injured more than 25 policemen on duty.

Read: Khilafat 2.0: How Useful Idiots in the media and political parties were fooled by Jamia students associated with the ‘blood brother’ of a banned Radical Islamic outfit

The Ahmedabad Police had arrested Congress Corporator Shehzad Khan Pathan along with 32 others for carrying out the deadly attack during anti-CAA riots on police personnel. They have been booked for attempt to murder, rioting and assaulting police.