It is important to note that the Swastika is not a corporate logo to have a precise shape and form, it is a very ancient symbol associated with several civilisations. Therefore, its form is always not the same 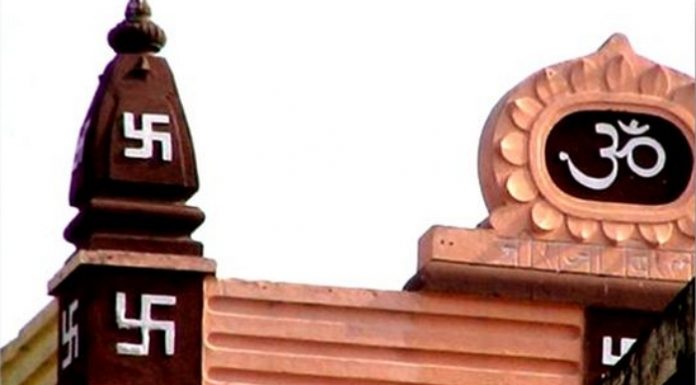 As the ongoing anti-CAA protests have turned into openly anti-Hindu, pro-Islamic demonstrations, today a poster from the protests at Shaheen Bagh in Delhi created a huge controversy. The poster featured Hindu women with Bindis in Burkha, and the bottom of the poster had a shattered Swastika, the sacred Hindu symbol.

Soon after the poster was widely criticised for such open depiction of Hinduphobia, including by BJP spokesperson Sambit Patra, the left-liberal camp started claiming that the poster depicts the Nazi Swastik, and not the Hindu Swastika.

for my many educated friends who believe a swastika in artwork at #ShaheenBagh is insult to Hinduism…also the youngsters drew women with bindis as sign of unity..I suggest sceptics attend a protest and will be charmed. Yup no money either as distributed in political rallies😉 pic.twitter.com/urJQfiBlXQ

They also said that as the symbol is tilted, it is the Nazi symbol and not the Hindu Swastika.

The claims made by the so-called fact-check site is completely false and baseless, and evidently aimed at brushing aside the apparent Hinduphobia seen in the anti-CAA protests. Contrary to the claims of Alt News, the four dots not an integral part of the Swastika, and it is often drawn without them, although sometimes the dots are added.

The Swastika has been made part of the design of many Hindu temples, and a cursory glance will show that the dots are not always present in them. For example, the following image is of Laxminarayan Mandir in Delhi, also known as Birla Mandir, where the Om symbol and two Swastikas are engraved on its front, but the Swastikas don’t have any dot.

Similarly, Swastika seals found in Harappa from Indus Valley civilisation also does not have any dots between the arms. In fact, it is very common to find the symbol on Hindu temples, old and new, without any dot. Therefore, the claim that Hindu Swastika must have the four dots is a false claim made by Alt News.

Similarly, although the Swastika is mostly depicted straight on most places, it is not unusual to see 45-degree tilted symbols in some Hindu places. The following image of a Shiv Mandir has three Swastika, all without dots, and one of them is tilted. 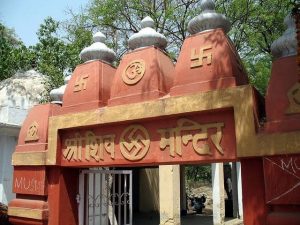 It is important to note that the Swastika is not a corporate logo to have a precise shape and form, it is a very ancient symbol associated with several civilisations. Therefore, its form is always not the same. Moreover, just like Hinduism is not a religion of one book, one god, it is also not a religion of one symbol. As a consequence, the Swastika can be depicted differently in Hindu culture, with or without dots, straight or tilted, with or without decorative serifs at the end of the arms. Such variances in its appearance do not mean that they are not Hindu symbol. It is ironic that people who have shown hatred for Hindus in the past now want to define what is Hindu and what is not.

Therefore, the claim made by Alt News and others that the symbol seen in the poster can’t be a Hindu Swastika is not correct, and they are spreading misinformation about the Hindu holy symbol. Moreover, it can also be mentioned that the Nazi Swastik, the hooked cross, is always drawn in black inside a white circle.